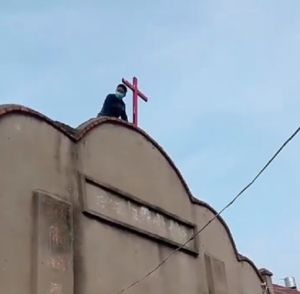 China Christian Daily (a state-approved Christian news site based in Shanghai) said a cross demolition campaign that started in early January in Anhui had ended due to the Covid-19 outbreak, but it reported cross removal taking place again in March amid the crisis. Local sources said that up to Chinese Lunar New Year (25 January) crosses had been removed from at least ten churches, while a local pastor said that almost all churches in Anhui’s Feixi county had lost their crosses. The authorities claimed the crosses were a safety hazard because they were “too high and too bright“.

China Christian Daily reported that sources said the government targeted illegal churches, churches in conflict with their neighborhoods and those where crosses were deemed to be safety hazards. Some new churches were forbidden to install crosses on the top of their buildings. Several registered churches planned to move because of the demolitions, but the authorities refused to grant them land.

On 8 March in Anhui’s Bengbu city, Hongji Church (pictured) in Huaisheng district had its cross removed when a head of the local United Front Work Department climbed on top of the building and pulled down the cross by himself. The church had more than twenty regular members, mostly local villagers.

Christians in Bengbu said that for two months the township government had been attempting to persuade church members to demolish the church on their own. After church members refused to comply, the government assigned specialists to forcibly remove the cross. A Christian named Li said the cross of another local church was also demolished recently.

Elsewhere in Anhui province, on 13 March a church cross was demolished in Bozhou city’s Guoyang county. A Christian who requested anonymity said the government shut down the village due to coronavirus and officials seized the opportunity to dismantle the cross, which topped a church building that served forty members. Multiple videos taken at the time show a crane moving a red cross from the roof, placing it on the ground, workers lifting it onto a large truck and the truck being driven away.

On 11 March, the authorities in Jiangsu province took a bulldozer to the walls of Cedar Church (pictured) in Yixing city. The church uploaded a video to the internet showing the building partially demolished, with debris scattered and the roof missing. In the video, five construction workers are seen removing the roof and clearing the scene.

A Christian named Wang from Nanjing in Jiangsu said the government had forcibly removed crosses from more than ninety percent of house churches in the province. The crosses that remained intact mostly belonged to churches in isolated villages or at the junction of two provinces, where the jurisdiction was ambiguous.