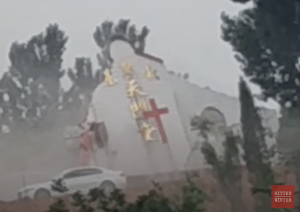 As the Chinese authorities continue to crack down on Christianity, demolition of government-approved church buildings is becoming a regular occurrence. Three demolitions were carried out recently in Henan province.

Tianmen Church (pictured), which is registered with the Three-Self Patriotic Movement, is located in the Jianxi district of Henan’s Luoyang city and has over 1,300 registered members. The building, constructed twenty years ago, was demolished on 31 May.

At 5 am that morning, government officials broke the lock to the church doors and removed all items from the building. The area around the church was barricaded off and six checkpoints were set up, preventing anyone from approaching. Over one hundred people took part in the demolition.

A member of the congregation told Bitter Winter, “The state’s support to Three-Self churches is nominal: they only want to control, shut, or demolish them, while lying to everyone about religious liberties in China. They do wicked deeds under the banner of virtue. Churches are persecuted everywhere.” 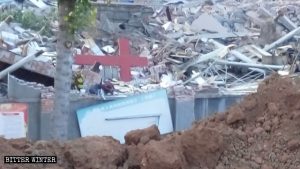 Another congregation member said that the local government destroyed the church and ancillary buildings to make way for the construction of a canal and a road. On 28 May, the congregation had received a “notice on the demolition of illegal constructions” with orders to demolish the church themselves by the next day. Hoping to save the building, the church director appealed to the district’s Ethnic and Religious Affairs Bureau, explaining that the church had all required government permissions. He hoped the Bureau would act as a mediator, but his appeal did not save the church.

“They could have avoided the demolition, but a deviation for the canal was made on purpose, to make sure that the church had to be demolished,” a local man commented.

“Where will we hold worship services?” a congregation member asked in tears. “It feels worse than seeing my house being demolished. It’s heartbreaking!”

A video of the church demolition was published by Bitter Winter, an online magazine that reports on religious liberty and human rights in China.

Another Three-Self church in Jianxi district, Bethel Church, had its building demolished on 28 May. The demolition took place at 10 pm in the evening and was carried out on the pretext of “road construction”. The photo shows Bethel Church before and after demolition.

A church member commented, “After the coronavirus lockdown has been lifted, all industries returned to work, and we were expecting the church to reopen for services. But it was demolished instead. This is forcing us, believers, to a dead end.” 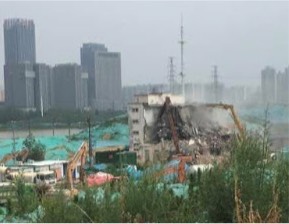 On 12 June, Chinese authorities demolished another Three-Self church building in Henan province, Sunzhuang Church (pictured), named after the western district of Henan’s capital Zhengzhou. Christians were forcibly removed from the building during the raid and several were injured.

Around two hundred officials from various government departments arrived with cranes and heavy-duty machinery and personnel from the Zhengzhou High-Tech District Ethnic and Religious Affairs Bureau forced their way into the church. Without showing any legal documents, officials removed all furniture, books and other teaching materials and took control of the Christians gathered there.

At least one Christian woman resisted but she lost consciousness after being pushed to the ground and had to be taken to hospital. Another Christian was hospitalised after officials beat her and one Christian man was taken into custody. A demolition crew then moved in and destroyed the building within hours.

In a previous incident in June 2013, the Sunzhuang Village Committee issued a demolition notice to the church, stating that the Christians had failed to completely follow the procedures for building a church. In response, the church presented the authorities with a certificate showing that they had obtained prior government approval. The government sent a group of people to demolish the church and cut off its electricity and water supply but the Christians protected the church and the officials were unable to proceed.

Read more about the persecution of Christians in China in the Church in Chains China Country Profile.

Read the Church in Chains report CHINA’S CRACKDOWN ON CHRISTIANITY – an analysis of the persecution of Christians in China in the first year of implementation of new Regulations for Religious Affairs, a briefing document prepared for the Oireachtas Joint Committee on Foreign Affairs and Trade, and Defence.