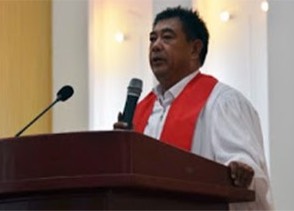 As China continues to tighten its grip on religion, the State Administration for Religious Affairs (SARA) has introduced new “Administrative Measures for Religious Clergy”, which came into effect on 1 May.

First announced in November 2020 and approved in January 2021, the new Administrative Measures apply to the five authorised religions – Buddhism, Catholicism, Islam, Protestantism and Taoism – and are an extension of the Regulations for Religious Affairs that came into force in February 2018 and were reinforced by Administrative Measures for Religious Groups in February 2020.

The photo shows Pastor Li Juncai of Yuanyang County Central House Church in Henan province, who was sentenced in January to five and a half years in prison for objecting to the removal of his church cross and refusing to change church signs proclaiming “Love God and people” to “Love country, love religion”.

Under the new Administrative Measures, those who “engage in religious teaching activities” must register on a database of religious clergy, established by SARA, and will be given an identification number and a clergy certificate. Anyone not registered on the database will not be permitted to undertake ministry.

To qualify, according to Article 3, “Religious clergy should love the motherland, support the leadership of the Chinese Communist Party, support the socialist system, abide by the Constitution, laws, regulations, and rules, practice the core values of socialism, adhere to the principle of independent and self-administered religion in China, adhere to the direction of the Sinicisation of religion in China, operate to maintain national unity, religious harmony, and social stability.”

Not only must clergy “adhere to the direction” of Sinicisation, but Article 7 states that they “should play a role in promoting the Sinicisation of religion”.

Sinicisation is China’s policy of making all religions Chinese in character and bringing them into submission under the Chinese Communist Party. For Christians, that means forcing churches to register with the Three-Self Patriotic Movement (for Protestants) or the Chinese Catholic Patriotic Association and obeying an increasing number of conditions. Registered churches must sing patriotic songs, fly the national flag, install surveillance cameras, listen to pro-Communist Party sermons, put up portraits of the president and display quotes from his speeches extolling “core socialist values”.

Under the new Administrative Measures, registered clergy and organisations will be obliged to assess and report on each other in order to apply rewards and punishments, which will be recorded in the national database.

Senior religious leaders who comply with the Administrative Measures will remain in their position for a term of three to five years, after which they must submit their personal information to the authorities again. If they criticise or fail to obey regulations, their application to re-register may be refused.

Bitter Winter, a Chinese magazine that focuses on religious liberty and human rights, commented that the new Administrative Measures “create an Orwellian system of surveillance, and strengthen the already strict control on all clergy”. It added, “To be registered in the data base, it is not enough to be proficient in one of the authorised religions. The clergy should prove that they ‘support the leadership of the Chinese Communist Party and support the socialist system’ (article 3)… It is difficult to be registered, easy to lose the registration.”

Bitter Winter continued, “Loyalty to the CCP and love for the Party is assessed periodically, in a system similar to social credit. The clergy receives awards and punishments, and if the latter exceeds the former registration in the data base is lost and worse consequences are threatened. Compliant clergy is thus transformed into apparatchiks of the CCP, lured by rewards and terrorised by punishments. They will be called to ‘Sinicise’ their religions and preach love for the CCP to their devotees. Not much will be left of genuine religion – which is precisely the aim of these and other previous measures.”

Read more about Christianity in China in Church in Chains’ China Country Profile.