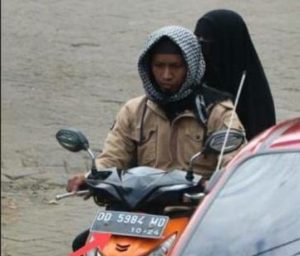 Two suicide bombers from an Islamist militant group attacked a Catholic cathedral in Makassar, Sulawesi, at the end of a Palm Sunday Mass on 28 March. At least twenty people including security guards were injured and were taken to hospital to be treated for burn injuries. The congregation was much smaller than usual because of Covid-19 restrictions.

The bombers, who died at the scene, were a man and woman in their early twenties who had been married for six months and were expecting a baby. They arrived at Makassar Cathedral on a motorbike and tried to enter the compound at a side gate but a security guard became suspicious and went towards them, whereupon they detonated a pressure cooker bomb packed with nails. The blast occurred at around 10.28 am local time and shattered windows in nearby hotels and cars.

Indonesia’s National Police Chief General Listyo Sigit Prabowo told reporters that the attackers (whom the authorities have referred to only as L and YSF) are believed to have been members of the Islamic State-affiliated armed group Jemaah Anshorut Daulah (JAD), and added: “L had left a will to his parents saying that he is bidding them goodbye and was ready to be martyred”. The couple regularly attended a JAD study group at which members reportedly took turns to teach doctrine, plan for jihad and prepare for suicide bombings.

Following the attack, police carried out a series of raids in which they seized five potential bombs and bomb-making equipment. The Police Chief said 13 people who had roles in planning the attack were arrested in Makassar, Jakarta and West Nusa Tenggar province – four of them belonged to the same study group as the suspects.

This attack follows only four months after four Salvation Army members were murdered by a separate Islamist group in Central Sulawesi.

In May 2018, the head of a local branch of JAD with his wife and children carried out suicide bomb attacks on three churches in Indonesia’s second-largest city Surabaya in Java, killing thirteen people and injuring more than forty others.

In 2016, a member of JAD bombed a church in Samarinda in Borneo, killing a toddler and injuring four others.

Responding to the attack on Makassar Cathedral, the chairman of the Indonesian Communion of Churches, Gomar Gultom, said: “This ill-fated incident adds to the long list of acts of violence and terror that have occurred in the archipelago.” He called on people not to be afraid and anxious, but to remain vigilant and he asked Christians to pray for peace.

Indonesia has the world’s largest Muslim population, with a history of pluralism and moderate Islam, but in recent years militant Islamist groups have grown in strength and the spread of extremist Muslim ideology has led to increasing intolerance of religious minorities and a rise in violent attacks on churches.

Read more about Indonesia in the Church in Chains Indonesia Country Profile.