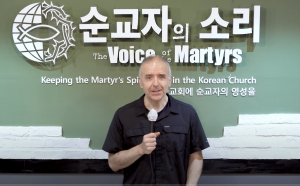 Eric Foley (co-founder of Voice of the Martyrs Korea) told attendees at the 2021 Church in Chains online conference that North Korean Christians place a great value on the Ten Commandments, the Lord’s Prayer and the Apostles’ Creed.

He said that these elements are used because they are easy to memorise (in a setting where being found with a printed Bible would mean being taken away to labour camp) and relevant to their daily lives. Speaking about the Ten Commandments, Eric said that the underground North Korean church uses them as a means of self-examination and pointed out how relevant the commandment prohibiting idolatry is in a country where there are 40,000 statues to Kim il-Sung, the founding leader of the country, who is known as the Eternal President. He said that the North Korean church uses the Lord’s Prayer rather like a computer zip file which compresses information, i.e. each petition in the Lord’s Prayer is seen as outlining a different aspect of prayer. The Apostles’ Creed is used as a “diagnostic tool” or theological handbook to check that whatever North Korean Christians are being taught is in line with the teaching of the apostles.

Eric emphasised how different church life is in North Korea to other countries because of the all-pervading restrictions in the country and the widespread surveillance, including the requirement on citizens to report any unusual activity in which neighbours engage. Churches in North Korea don’t have clergy or  buildings but rather meet in family groups at home. He described how North Korean Christian parents often wait until their children have reached teenage years before they share their Christian faith with them. This is because primary school teachers are trained to ask young children questions such as “Does your family have a special book at home?” and “Does your family sing special songs – different to the ones that we sing at school?” in a bid to find out if they belong to a Christian family.

Following Eric’s keynote conference speech and the viewing of a short video dramatising the story of how one North Korean became a Christian, Pamela Coulter (member of the Church in Chains board) prayed for North Korea, the underground persecuted church and the work of Voice of the Martyrs Korea.

Eric answered many questions posed by attendees in a live  Q & A session including: 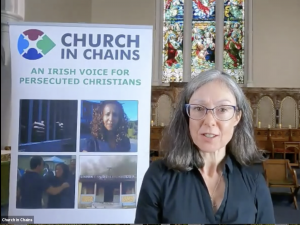 Virginia Chipperfield’s presentation began with an update on the situation of Christians in the Middle Belt of Nigeria, where over 2,000 Christians have been killed during the past two years in a relentless campaign of violence and murder by Muslim Fulani militants. She highlighted Church in Chains’ work in channelling aid to Christians displaced in these attacks (through our partner organisation Stefanos Foundation) and the silent vigil held by Church in Chains outside the Nigerian Embassy in Dublin in July.

Virginia updated supporters about Christians facing grave danger in Afghanistan following the Taliban takeover and outlined plans to channel aid to those seeking to flee the country and also to those who plan to stay. She also highlighted the volatile situation for Christians in Eritrea describing recent arrests of Christians that followed a year during which over 200 Christian prisoners had been released.

As the conference concluded, David Turner announced that Church in Chains’ next initiative would be the International Day of Prayer for the Persecuted Church, to be held on Sunday 7 November, and encouraged attendees to contact the leaders of their local churches and arrange to take part. The focus in Ireland will be on praying for the persecuted church in India and resources will be available from mid-October.