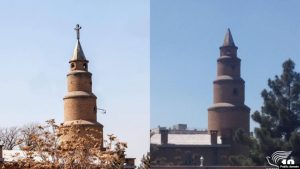 On 9 May, a 100-year-old Assyrian church in the northwestern city of Tabriz was closed down and had its cross forcibly removed by government officers.

The Assyrian International News Agency reported about the closure of the Presbyterian church: “A large number of agents from the Ministry of Intelligence and state agency EIKO [the Execution of Imam Khomeini’s Order, under direct control of Supreme Leader, Ayatollah Ali Khamenei] entered the church compound and changed all the locks on the doors, removed the cross from the tower, installed some monitoring instruments and started to threaten and force our custodian to leave his place inside the compound immediately.”

The Assyrian Christian community in Tabriz has been shaken by this drastic sign by the authorities that it is no longer welcome to hold any services there. The historic church, which is a National Heritage site, was “confiscated” by a revolutionary court order in 2011. However, the congregation had been able to continue using the building for Assyrian language services for the past eight years.

“Many churches owned by Protestants have been confiscated in Iran,” explained Mansour Borji of Article18: “In most cases the government has been unable to repurpose them, especially if they were listed. So they typically remain as empty buildings, often neglected, and turn into ruins before being demolished.”

Christians from the historic Assyrian and Armenian communities (about 80,000) are a recognised religious minority in Iran and have been able to practise their faith relatively freely, on the condition that they do not hold services in the Farsi language. In total there are about 800,000 Christians in Iran, the majority of them from Muslim backgrounds who must keep their faith secret and face serious consequences if discovered.