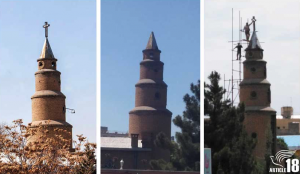 The cross on top of an Assyrian Presbyterian Church building in the northwest Iranian city of Tabriz was reinstated on 9 July, following international outcry.

The cross had been torn down from the church tower on 9 May 2019 by agents of the Ministry of Intelligence and EIKO (a state agency under the direct control of Supreme Leader Ayatollah Khamenei) who raided the church compound, changed the locks and ordered the church warden to leave. While the cross has been reinstated, the church remains closed.

On 25 May, the Assyrian representative to the Iranian Parliament, Yonathan Betkolia, wrote an open letter to President Rouhani calling for the cross to be restored and the church to be reopened. He wrote: “Mr Rouhani, is this action befitting the dignity of the Islamic Republic of Iran, to treat the sacred places of Christians in such a way?” and urged the president “to urgently take the necessary steps to reopen the church and to repatriate and reinstall the Holy Cross”.

In June, senior legal adviser to the president Aliakbar Gorji Azandaryani publicly questioned the legality of the closure, saying he had “serious doubts about the legality”. He referred to several articles of Iran’s constitution, especially article 13, which states that religious minorities are recognised and free to perform their religious ceremonies, and added that the closure went against several provisions of Iran’s Charter of Citizens’ Rights, which President Rouhani launched in 2016. He asked the local governor to look into the closure and removal of the cross.

The reinstatement of the cross has been widely welcomed, but the authorities made no other changes and church members still have no access to the building.

An Iranian church leader commented that the reinstatement is a great event but that the congregation still needs to receive back the keys and have permission to worship freely.

The one-hundred-year-old church building, which is a National Heritage site, was confiscated by order of the Revolutionary Court in 2011, but the congregation was able to continue using it for Assyrian-language services until the confiscation order was enacted in May 2019.

Following the closure, Article 18’s Advocacy Director Mansour Borji explained, “Many churches owned by Protestants have been confiscated in Iran. In most cases the government has been unable to repurpose them, especially if they were listed. So they typically remain as empty buildings, often neglected, and turn into ruins before being demolished.”

Iranian Christians from the historic Assyrian and Armenian communities are a recognised religious minority and may hold church services in their own languages but not in Farsi (Persian), the language spoken by the general populace.

A pro-government news agency in Iran has claimed that the Tabriz church was never forcibly closed and that its cross fell down, rather than being torn down, and was replaced after being repaired.

Fars News Agency interviewed two senior Armenian Orthodox church leaders from the region, who are quoted as saying that the news reports were only “false rumours” and “lies” and that Christians in Iran had always been well treated.

Mansour Borji pointed to the statements by Yonathan Betkolia and Aliakbar Gorji Azandaryani as evidence that the church had indeed been closed, and asked: “Why has Fars not spoken with Assyrian church leaders and Synod members who are forced to exile, and instead has interviewed members of the Armenian Orthodox Church, who have little or nothing to do with the ownership of the building?”

He said Fars’ report was an effort at “damage control” after the “despicable act” of forcibly closing the church and taking down the cross.

The Fars report claims that the “rumours” of the church closure were part of a plan by enemies of Iran and criticised “Zionist evangelical media”. One of the interviewees called the evangelical movement a “danger not only to the Christian community but also to the entire human race”.