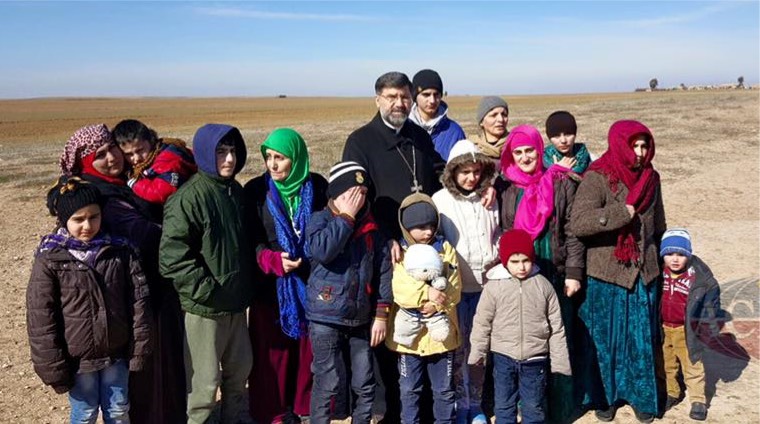 Earlier today (29 January), another group of 16 Christian hostages was freed by Islamic State militants who had been holding them captive since February 2015.

The latest group of released hostages is comprised mainly of women and children and includes four mothers and their children. As with previous releases, the freed hostages were met by Bishop of Syria Mar Afram Athneil who is Chairman of the Assyrian Church of the East Relief Organisation (ACERO).

A total of 104 Assyrian Christian hostages have been released by Islamic State militants since the beginning of November. The hostages were released in five separate groups: 37 in early November; 10 in late November; 25 on Christmas Day; 16 in mid-January and 16 today. Following these releases, it is thought that 73 Assyrians from the Hassaka group remain in captivity (two other groups of mainly elderly hostages were released previously).

The Christians were taken hostage in February 2015 when Islamic State militants overran 35 Assyrian villages along the Khabur River in Hassaka province, northeast Syria, and abducted 253 Assyrian Christians. During the attacks, 3,000 other Assyrians were driven from their villages; most have not returned.

Each group release has followed extensive negotiations led by church leaders working with local negotiators. There has been no public mention of ransom being paid but it is known that the terrorists originally demanded $100,000 per hostage, totalling $23 million, but when it became clear that the Assyrian community could not afford this, their demands were lowered to between $12 million and $14 million.

A Demand for Action (ADFA), a campaign group for minorities in the Middle East, welcomed today’s news. “Obviously we are very grateful more are freed,” said ADFA spokeswoman Diana Yacqo. “This with no doubt has been one of the most difficult periods in the church’s history and very challenging to many, but thankfully the church leaders have not given up at all and have pursued this from the beginning.

“However it makes us question if there ever will be a safe environment for our people to live there again. We have always lived in harmony but this is proving difficult as time goes by. We don’t know what the future holds for us in the Middle East. Our history and churches have been destroyed, our people fleeing and kidnapped. It’s literally a nightmare situation and yet still nobody wants to help.”

She continued: “The United Nations has neglected the situation, our pleas to our respective governments have gone unnoticed, we just seem to be the forgotten people of those lands.”

The Assyrian Church of the East is an ancient branch of Christianity whose roots date back to the 1st century AD. Assyrian Christians speak Aramaic, the language of Jesus, and have origins in ancient Mesopotamia – a territory which spreads across northern Iraq, north-east Syria and south-eastern Turkey.