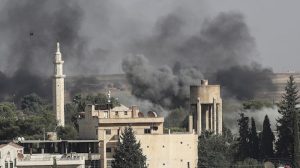 Christian leaders in northeast Syria are very concerned about their communities’ vulnerability following the launch of Turkey’s incursion into northern Syria on 9 October. The incursion has brought renewed terror to the region, especially for minority communities, and Christian leaders fear that Islamists among the Turkish forces will pursue an unofficial agenda to target non-Sunni communities. (The photo shows the city of Ras al-Ain, where a Syriac Christian civilian was among those killed in the first days of shelling.)

Turkey calls its incursion “Operation Springs of Peace” and insists that it has two objectives: to create a “safe-zone” along the border by combatting Kurdish-led forces; and to facilitate the repatriation of Syrian refugees from Turkey. Middle East Concern says Christian leaders fear that the repatriation plan, in which refugees from other areas of Syria would be resettled in the northeast, constitutes demographic engineering intended to boost the Arab Sunni presence to the detriment of Kurds and other communities.

Northeast Syria, the principal Kurdish region in the country, is a region of diverse ethnic and religious communities, including sizeable Syriac and Assyrian Christian communities who have lived at peace with their Kurdish Muslim neighbours for generations. The region is also home to Kurdish Christian converts from Islam. They have been allowed to practise their faith openly but are likely to suffer even harsher treatment than the traditional Christian community from Islamist soldiers within the Turkish forces and their Syrian opposition allies.

Analysts point out that while Christians and other minorities are particularly vulnerable, the Turkish operation does not seem to be religiously motivated and there is little evidence yet to suggest that Christians are being targeted.

As well as the fear of attacks, there are concerns for the security of prisons in northern Syria where thousands of former Islamic State fighters and their relatives are being detained. If militants escape, a resurgence of Islamic State is likely, and all minorities will suffer terribly. Hundreds of Islamic State family members are said to have escaped already from one camp.

Toufic Baaklini, president of the organisation In Defence of Christians, which advocates for Christians and other religious minorities in the Middle East, has stated: “If the United States and the international community do not act to stop Turkey’s indiscriminate assault, in some cases with Islamist militias, Turkey will complete the work that ISIS tried to do, in eradicating Christians from this region. It was only by the sacrifice of the US military and their Kurdish and Christian partners that ISIS was stopped.” 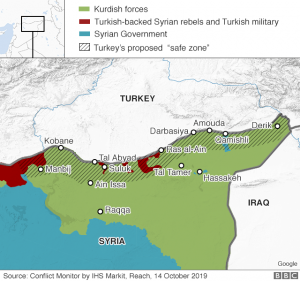 The UN says 160,000 Syrians have have fled their homes in the past week, though the Syrian Observatory for Human Rights (SOHR) says the number could be as high as 250,000, and the SOHR reports that seventy civilians have been killed already. Many more have been injured, and more than twenty villages have been seized.

Church in Chains partner organisation Steadfast Global reports that an estimated 60,000 refugees are waiting to cross the border into northern Iraq’s Kurdistan region. Steadfast Global reported on 15 October that Syrian Kurdish militias were attempting to stop the refugees from crossing into the Kurdistan region through the border check-point, and that desperate individuals and families had begun wading the adjoining river to escape Syria.

Commenting on the Turkish incursion, Syriac Christian leader Bassam Ishak, president of the Syriac National Council of Syria, told the US-based National Public Radio, “They are targeting residential areas in Qamishli, where people of all religious backgrounds live. We think this is a message to the Kurds and Christians there to leave, so Turkey can move refugees there. We think it’s a form of ethnic cleansing.” He estimates that about 40,000 or 50,000 Christians live in the area under attack.

Emanuel Youkhana, a priest of the Assyrian Church of the East who administers Christian Aid Programme Northern Iraq in Dohuk has accused President Erdogan of seeking demographic change, forcing out Kurds, Christians and Yazidis in favour of Sunni Muslims. “It’s crazy, this northeast area was the most peaceful of all of Syria,” he said. “Now Turkey has come to destabilise all of that, this is clear.”

National Public Radio reports that US Christian leaders have been almost unanimous in criticising President Trump’s acquiescence to the Turkish incursion, which began after he withdrew US forces from the region. President Trump defended his action in a statement in which he said, “The United States does not endorse this attack and has made it clear to Turkey that this operation is a bad idea.”

“What a disgrace,” tweeted Russell Moore, head of the public policy arm of the Southern Baptist Convention. “Kurdish Christians (and others among the brave Kurds) have stood up for the United States and for freedom and human dignity… What they are now facing from Erdogan’s authoritarian Turkey is horrifying beyond words.”

Among those now criticising President Trump are several evangelicals who were loyal supporters, including Franklin Graham, son of Billy Graham, who tweeted, “The Kurds are the ones who have been leading the fight against ISIS. Pray for the Christians who the Kurds have been protecting. They could be annihilated.”

Tony Perkins, chairman of the US Commission on International Religious Freedom, told National Public Radio, “I do not have a high level of confidence – in fact, I have no confidence – that Turkey will preserve true religious freedom or protect those religious minorities. We could see another genocide in that region.”

On 15 October, it was reported that the US had imposed sanctions on Turkish ministries and senior government officials, and Vice-President Mike Pence said President Trump had phoned President Erdogan to demand an immediate truce.

Who are the Kurds?

The Kurds are a stateless people group mainly spread across southeast Turkey, northern Syria, northern Iraq and northwest Iran. Kurds in Iraq have their own autonomous region, and many Christians sought refuge in its relative safety during the years of the Islamic State caliphate, especially in the city of Erbil. While Kurds are majority Sunni, they reject the extremist Islam of Islamic State.

After the first world war, the allied forces made provision for a Kurdish state, but this provision was overturned by the Treaty of Lausanne in 1923, which set the boundaries of modern Turkey and left the Kurds with minority status in each country. This has led to continuous unrest. The Kurdistan Workers Party (PKK), a militant organisation that has waged an armed struggle against the Turkish state for self-determination, is designated a terrorist organisation by Washington and Ankara.

Kurdish-led forces were a key ally of the US in the fight against the Islamic State in Syria and they described the recent US withdrawal as a “stab in the back”. On 13 October, Kurdish-led forces announced a deal with the Syrian government for military support to help repel Turkey.