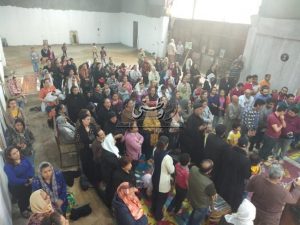 On 23 April, police told Copts in the village of Mit-Nama in Qalyubiya governorate, north of Cairo, to halt worship in a building they were using as a church. There had been widespread incitement to attack among local Muslims, who claimed the building was not licensed for Christian worship.

The building belongs to the diocese of Shubral-Kheima and was recently bought by Shubral-Kheima’s Bishop Anba Marcos. Closure would mean that Mit-Nama’s 1,500 Coptic families would have no place to worship in their village. Since 2001, they have twice attempted to build on land they bought, having obtained legal permits, but in 2001 and 2007 construction had to stop when local Muslims violently attacked the Copts and their builders.

In an attempt to persuade the Copts to leave the new church building, police said they would allow construction on the first site, but the Copts believe this to be a ruse and fear that if they leave they will not be permitted to build. They have refused to leave.

The incitement to attack and the police closure came as the Christians were preparing to hold prayer vigils throughout Holy Week and then celebrate Easter Sunday. (This year, Easter fell on 28 April in the Coptic church.) 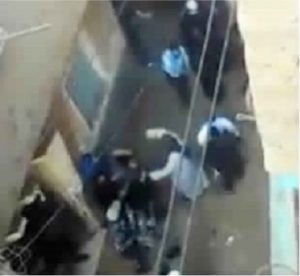 Earlier in the month, on 12 April, police evacuated and closed a church building in the village of Naga al-Ghafir in Sohag governorate, Upper Egypt, after it was surrounded by local Muslim villagers protesting violently about construction work that was being carried out. (The photo, taken with a phone, shows some of the protesters.)

At the time of the protest, approximately two hundred Christian children were attending classes in the building, which is located 500 km south of Cairo. Police arrived quickly and evacuated the terrified children and two priests, Father Bakhoum and Father Basileus, and closed the building to appease the crowd. Father Basileus was one of two people slightly injured during the incident – he sustained a minor head injury when a Muslim youth hit him with a club.

The building had been used as a church and community centre for ten years, the nearest legalised church being 20 km away. Four years ago it was granted an official permit to operate as a “church organisation” under the name Anba Karass Religious Association. In September 2017, Sohag Diocese filed an application for legal status as a church.

The building serves 1,300 Copts and measures only 100 square metres, so two years ago Sohag diocese bought a small house adjacent to it, connected the two buildings (after submitting all payments and paperwork to the authorities) and started constructing three more storeys. Two storeys were built two months ago and the third was being constructed when the village mayor, a Muslim, discovered it on 11 April. He started shouting abuse, accusing the Christians of treason because of the development, and called on other Muslims to join his protest. He reported the matter to the city council, which sent council workers immediately to confiscate all construction materials.

On Friday 12 April, a mob of angry Muslim villagers armed with sticks and knives gathered to protest against the development. The mob could not get through an iron gate to reach the building, but shouted, cursed and pelted the building with rocks, terrifying the children. Police dispersed the demonstrators and brought the Christians out to safety, but none of the perpetrators was caught.

Police took in the two priests for questioning and told them that the building would be closed to avert possible violence. Fr Bakhoum explained that the closure would severely pain the Copts who were preparing to observe Palm Sunday, Passion Week and the Feast of the Resurrection, but he was overruled and the building was closed.

Advocacy group Egyptian Initiative for Personal Rights (EIPR) condemned the closure of Anba Karass and stated, “The EIPR condemns the practice of security agencies closing down churches in which worship services are regularly held, on the grounds that they are not officially licensed. This violates Article 8 of Law 80/2016 on the construction of churches, which provides for the continued functioning of churches and religious buildings even in the absence of the necessary permits or failure to meet the conditions for legal status.”

Since the Egyptian parliament passed the Law for Building and Restoring Churches in 2016, the EIPR has documented 32 incidents of tension and violence and says the authorities have closed 22 churches.

For decades, it was almost impossible for Egyptian churches to obtain government permits to construct or repair buildings. The 2016 law was intended to make it quicker and easier to obtain construction permits and also to legalise unlicenced churches, but progress has been very slow. Some 3,730 churches have applied for permits under the terms of the law, but only 894 permits have been issued.