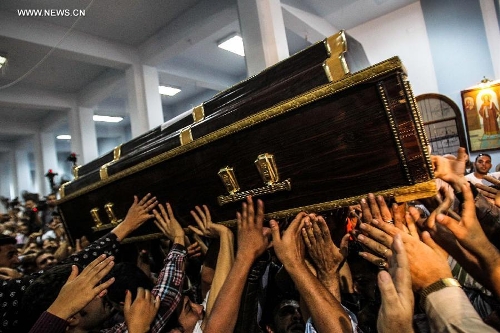 Four Copts died in a terrorist attack on Sunday 20 October, as they celebrated a wedding at a church in Giza.

On the evening of Sunday 20 October, two masked men on a motorbike opened fire on a crowd of Copts gathered on the pavement in front of the Church of the Holy Virgin and the Archangel Michael in the district of Warraq in the Giza region of Greater Cairo. They sprayed the Copts, who were attending a wedding, with gunfire from their automatic weapons. Four Copts died and 18 people were wounded; several are in a critical condition. Among the wounded were three Muslims who had been sitting at a nearby pavement cafá. The church lies on the Nile Corniche, a busy thoroughfare that links two main roads but had light traffic at that time of the evening.

“We heard gunfire and ran outside to find people and children lying on the ground swimming in their blood,” said Father Sawiris Boshra. Camelia Hilmy Attiya (56), the mother of the groom, was shot in the heart and died instantly. Samir Fahmy Azer (45) and Mariam Nabil Fahmy (12) died on their way to the hospital; Mariam’s body was riddled with ten bullets. A young man named Mukhliss Riyadh carried Mariam out on his shoulders and rushed her to hospital. He was given a plastic bag that included her blood-drenched clothes, and found that one of her boots had been penetrated by three bullets. Mariam Ashraf Messeiha (8) died a few minutes after reaching hospital – she could not survive the bullets in her chest. The dead were all related to each other, as were many of the injured.

Sisters Mariam and Ireni Adel Kokab (10 and 6) have been reported missing. Their parents have toured the all the hospitals to which the victims were brought but have not found them. They have reported the matter to the police.

The gunmen fled the scene on their motorbike. Witnesses said that a car blocked traffic outside the church building minutes before the shooting, allowing the gunmen the space they needed and giving them a relatively easy getaway. The police and prosecution hurried to the scene, and investigations are ongoing. The day after the shooting, the authorities arrested five men in connection with the incident; one of them was said to belong to a terrorist organisation, while the other four were members of the Muslim Brotherhood.

On Monday 21 October, several thousand Copts converged on the same church to attend the funeral of the four victims. The mourners spilled onto the street, grief-stricken and angry. As they waited for the hearses to arrive, the congregation sang hymns that included Lord have mercy and I need you, Lord of hosts. Addressing the mourners, a young member of the choir said, “Even in these circumstances, we can only talk of the heavens above and ask for the help of Christ.” A prayer followed: “Help us, Jesus. Forgive us. Bless us. Our eyes are filled with tears.”

Father Dawoud Ibrahim of the Warraq church said the attack was a horrible terrorist crime that targeted no one in particular, but was intended to terrorise the Copts and the entire community. He deplored the fact that churches are poorly guarded and demanded adequate protection for churches, especially given that there are several dates and occasions that witness large crowds of Copts at church.

Father Yustus of the same church also demanded higher security, particularly as the church is on a route frequented by Muslim Brotherhood demonstrations. Local residents say that Muslims protect Christians whenever pro-Morsi protests are held in the area. Church officials said they had received threats before the shooting and had informed the police, to no avail. “The interior ministry is not equipped to station a police car outside each church,” said a guard at the church compound. One church leader said that the church had been left without a police guard since the end of June.

Prime Minister Hazem al-Beblawi condemned the attack in a cabinet statement, calling it a “despicable criminal act”. “Such terrible acts will not succeed in driving a wedge between Egypt’s Muslims and Christians,” he said.

The Coptic Church issued a statement condemning the attack: “This type of terrorist attack targets civilian Egyptians who have every right to live in peace and security during this pivotal historical moment when Egypt is working for national solidarity.”

The Council of Egypt’s Churches and the Catholic and Evangelical Churches in Egypt issued messages of condolence to the Coptic Orthodox Church and congregation. Liberal political parties and groups, rights groups and activists in Egypt also sent their condolences and condemned the attack.

An Islamist coalition including the Muslim Brotherhood spoke out against the violence, blaming it on the Interior Ministry. It said that the ministry had been “busy pursuing peaceful demonstrators” rather than “bringing about the safety of Egyptian citizens”.

Islamist violence has increased since the military deposed President Morsi in July and cracked down on his Muslim Brotherhood and its allies. The attacks have targeted security forces and Christians, whom the Islamists hold partly to blame for the ousting of President Morsi. Sunday’s shooting increased the fear of Coptic Christians, and also raised concern that an insurgency by Islamic extremists in the Sinai Peninsula and an increase in attacks in rural areas may be shifting to Cairo, where attacks have been less common. The biggest crackdown on the Muslim Brotherhood in decades, including the arrest of its leaders, has not eased the Copts’ fears.