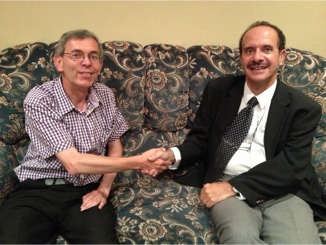 In late August, Ramez Atallah (General Secretary for The Bible Society of Egypt) visited Ireland. His visit came just over a week after over 70 churches and institutions were set on fire. David Turner (Director, Church in Chains) interviewed Ramez about the current situation.

There has been huge upheaval in Egypt over the past two years. What effect has that had on the church?

I think it’s made a lot of Christians want to leave the country, and feel that this is not their country, and that it’s dangerous to stay here. Particularly when the Muslim Brotherhood took over, the conviction of many Christians was that this will become political Islam, and this will be an Islamist country and that they won’t be as welcome as they were and in a sense the rug is being pulled out from under their feet. But when on June 30th, much to our surprise, in response to a plea by some young men saying we don’t want the President to continue, we want him to resign, sign a petition, go out on the streets on June 30th – they prepared it for three months – when 20, maybe 30, I don’t know how many million people went to the streets saying, “We do not want an Islamist president,” we were very encouraged as Christians. Christians were [in this with a party], celebration, because we saw Muslims out on the streets, like us, they didn’t want this kind of thing, they want to live like normal lives, they didn’t want these angry, radical Muslims taking over. So it was very encouraging, and when President Morsi was removed, and we began moving towards a government that we felt more comfortable with, there was jubilation. Now, when the Muslim Brotherhood retaliated on August 14th, people were very discouraged. But the discouragement, burning of the churches, did not crush the Christian church. It discouraged it, but it didn’t crush it, because there’s a real sense that God is doing something, and the leadership of the church – Protestant, Catholic, Orthodox – are convinced that we are moving towards the best era for Christians in Egypt.

Egypt has been in the headlines for the past few weeks and we have heard the terrible news of over 50 churches being attacked in one day, and also some Bible Society shops. How did that come about? Can you tell us what happened?

Well, what people don’t understand is that the so-called peaceful demonstrators, the Muslim Brotherhood, people who were demonstrating in Cairo, and the whole western world was labelling as peaceful demonstrators, were really terrorising and paralysing and holding hostage the whole of Cairo. The reason the army delayed and the police delayed, basically, in dispersing them, is two-fold. One, because they didn’t want anybody killed. They knew they were armed and could retaliate, and when they retaliate what can you do? And secondly, they had said, “If you disperse us, we’ll burn Egypt.” So they waited for 48 days, and against the advice of western governments and so on they went in and dispersed them because Egyptians couldn’t put it up any longer. The Egyptian authorities told the people, “If you want us to disperse go to the streets and demonstrate.” And more people went to the streets that day than went on June 30th, which was the time when Morsi was removed. So a very large majority of Egyptians, mainly Muslims, said, “We do not want political Islam, we want to disperse these Muslim Brotherhood. The police waited another two weeks. So what happened on August 14th had a plan. They went to our bookshop earlier in the week, wrote on it Islamaya – you saw the pictures, some writing on the closed walls. The buildings they wrote on it Islamaya were the ones they would destroy, they were mainly owned by Christians like Christian bookshops, churches, and some government institutions.

Islamaya means Muslim. And they are saying, these are people who are not legitimately on our land and we are going to get rid, we are going to purge the city of the Christians by making these properties Muslim.

And Bible Society shops were targeted because they were seen as Christian institutions?

Yes. I don’t think it’s because we did anything wrong, I think, in these two cities or three cities where they went very violently. They didn’t do anything in Cairo because they have CNN and BBC and all these news reporters are there, they would have shown them doing this violence. They went where there were no TV cameras and they did it so quickly.

In the midst of it all, one picture that came out to us showed a line of Muslim men arm-in-arm protecting a church in, I think, Sohag. Yes. So is that indicative of the fact that many Muslim people in Egypt didn’t approve of this?

Oh absolutely. I mean, if 30 million went to the street to say that they don’t want the Muslim Brotherhood, then you have of these 30 million, maybe three or four million would be Christians and the rest would be Muslims. The majority of Muslims want to live happily with Christians as we have all through the years.

What future, then, do you see for the church in Egypt?

You know, freedom as we know it in the west is not always a blessing. So I see much greater freedom for the church in Egypt. I’m not sure that that will necessarily be followed by spiritual growth. People pray less when they’re not persecuted. And so it’s a mixed bag. Definitely if we continue the direction we’re going, it’s going to be an Egypt where Christians feel much more at home, and freer. Whether this will revive and [?] result in more commitment to the Lord Jesus Christ is a question.

What three things should we pray for the church in Egypt?

First is for Christians – particularly true believers and qualified people – to be committed to stay in their country come what may. That’s the first thing. Because if people as soon as there’s trouble run away we wonder how well discipled [?] the church and they of course say we’re going west, where we’re free. So the first one is for Christians to remain.

The second is for church leaders to continue giving that message of vision and hope and no retaliation and not the sense of “Oh, we’re a persecuted minority, help us, save us,” that kind of thing, we’re saying, “We’re standing, we have rights,” and work that way. And that’s been the unity of the church [being reflected in the church] leaders’ unity in what they’re saying. And pray that that continues.

So. For Christians not to leave the country and for leaders to be united in a message of hope and anticipation, and finally that Egypt as a nation can get on with the business of being a nation. We’ve spent two years in unrest and the economy is in tatters, people [with jobs have lost], it’s a social disruption, and these last sit-ins just disrupted the life in Egypt and in Cairo. So, to go back to life as normal, so that the country can be united.