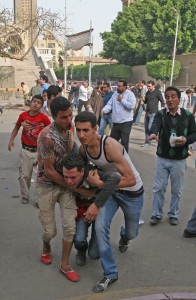 One Coptic Christian died and over 90 were injured on Sunday 7 April when a funeral service in St Mark’s Coptic Cathedral in Abbasiya, Cairo, was attacked by at least 200 Muslim rioters. The funeral was for four Copts killed in a riot two days earlier. The Copt who died, reportedly from gunshot wounds, was Mahrous Hanna Ibrahim; a young Muslim man known only as Mohamed also died, from a fractured skull.

On the afternoon of Sunday 7 April, thousands gathered in St Mark’s Cathedral for the funeral of the four men who had been killed in an anti-Christian riot on Friday 5 April. The cathedral compound is the headquarters of the Coptic Orthodox Church, site of the Coptic pope’s home and a symbol for all Egyptian Christians.

After the funeral service, the coffins were carried outside to waiting vehicles, and as they departed, Muslims began throwing rocks at them from an alleyway. Some young Coptic men took up sticks and rocks to retaliate, taking cover behind parked cars, but someone among the Muslims began throwing grenades down the alleyway into the crowd, causing a panic. The assault escalated into a massive attack involving firearms, grenades, Molotov cocktails, tear gas and firebombs.

The Copts ran into the cathedral compound to escape and threw rocks to hold back the Muslims, who by then had poured into the streets and were hurling missiles into the compound from the roofs of surrounding buildings. Inside the compound, some Copts urged the men involved in the fighting to respond in a Christian manner and not retaliate, but others thought this advice foolish. A siege ensued, which lasted for five hours.

The funeral service was used by many Copts as an opportunity to protest about conditions under President Morsi, who Copts believe has not done enough to protect them. Several times the service was interrupted by the chanting of slogans against President Mursi, and family members of the victims held banners stating: “The responsibility for the death of our people lies squarely on the shoulders of Mursi,” and “No for the hatred propagated against Copts”.

The anti-Christian riot on Friday 5 April occurred in Khusus, a poor district on the outskirts of Cairo. During afternoon prayers, an imam called for anyone who had a weapon to “Kill the Christians and cleanse Al Khusus of infidels.” There are several suggested reasons for the imam’s call (see below, What caused the riot?).

A mob formed and swept through a Christian part of the neighbourhood. Screaming “Allahu Akbar” (God is greater), the mob attacked a Baptist church building – which was not significantly damaged – and moved on to a Coptic Orthodox Church. Coptic-owned houses and shops were attacked, looted and burned, and a preschool nursery was destroyed. The Muslims shot at the Copts, who fired back. Copts fled to their homes in terror, cutting off their power supply and making sure they had water and fire extinguishers on hand to put out any fires.

Victor Saad Manqarious (37) had just finished work when the riot started. He parked his taxi and was walking to his home opposite the Orthodox Church building when the mob set on him and killed him. His uncle, Michael Anis, described the attack: “He was met by people who punched him in the eye, stabbed him in the neck and shot him in the head.”

Four others killed in the riot were: Morqos Kamal Mitry (25) and Essam Qadri Zakhary (37), both shot in the chest; Marzouq Attiya Nessim (45), shot in the head; and Mohamed Mahmoud (18), a Muslim who was found dead. Relatives of those killed in the riot gathered on the night of Saturday 6 April outside a hospital morgue in Cairo; they claimed that four other Christians had died in the attack but that their families had chosen to have them buried without autopsy on Saturday afternoon. Mohamed Mahmoud was buried in his hometown of Aswan on Sunday 7 April.

What caused the riot?

It has been claimed that the riot began after graffiti was daubed on the exterior walls of the local mosque. Two Muslim boys allegedly wrote their names and drew a swastika on the walls, and a worshipper leaving the mosque thought this was a cross and reprimanded them. Various passersby got involved, and an argument began that escalated into a street fight and then into a violent assault.

However, some local people said that the cause of the riot was an argument between a Muslim family and a Coptic one, while others claim that the attack was the outcome of Salafi harassment of Coptic women. (The Salafis, a radical Islamist sect, have been known to harass Coptic women, whom they deem indecent because they are not veiled.)