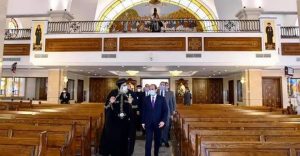 The complex and often controversial issue of church buildings has come into sharp focus yet again. On 21 May, President al-Sisi opened a beautiful newly-constructed church building in Alexandria, while later that day an existing building in a village west of the Nile Delta was destroyed by the local authority, leaving 3,000 Christians without a place of worship.

The new Coptic church was built by the government in the new Bashayer al-Kheir 3 housing project in Alexandria whose residents will come from slum areas of the city. The building was officially handed over to the Coptic church leader, Pope Tawadros, in a public ceremony during which President al-Sisi stressed the government’s policy that every new urban district should include a church and a mosque in the vicinity of schools, saying “This should serve to root in children’s minds that churches and mosques are the two wings that keep Egypt flying high, that we are all [Muslims and Christians] Egyptians and can never do without one another.” In response, Pope Tawadros thanked president al-Sisi adding, “May you live to bring about thriving development.”

Meanwhile, just over 60 kilometres away, a three-storey building used by the Coptic church in the village of Koum al-Farag in Abul-Matamir, Beheira, west of the Nile Delta, was demolished by police acting on orders from the local government, despite an appeal from the 3,000-member church which had used the building for the past fifteen years.

The demolition followed opposition from local extremist Muslims in the village to the church beginning work on a two-storey extension to use for Sunday school classes. Deacon Bishoy stated that the building work was legal. “But as soon as we started the work, extremist Muslims attacked us”, he said. “Luckily, this first attack was stopped by moderate Muslims in our village.”

However, the extremists then started to build a mosque on agricultural land next to the church – which was illegal. “We believe they built it out of protest,” Deacon Bishoy said. “Our village already has four mosques and another one wasn’t really needed. On top of that, they built it without the use of a foundation.”

The local authorities’ solution was to demolish not only the illegal mosque, but the legal church building as well. “The church lawyer made an official appeal against this order, but the mayor ignored it – despite being informed – and sent 200 policemen without warning,” said Deacon Bishoy. 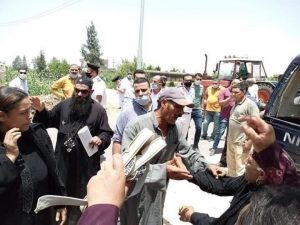 The congregation resisted fiercely, standing in front of the church and pleading for it not to be taken down. Bishoy described what happened: “The police, and some Muslim extremists from our village that came along with them, insulted our priest and hit him in the face and chest so bad that he fainted. Then they fired tear gas at us church members and attacked us physically; they even hurt women and children. They arrested 14 church members, including the priest, some women and a man whose arm was broken by the attackers. The church members were only released the next day. The man with the broken arm was given no medical treatment.”

The demolition of the church took six hours. Then the bulldozer continued to the illegally-built mosque and knocked down just one wall.

“It was the only church in our village,” said Bishoy. “The nearest church now is 15km away. It is too far if you consider that we Copts go to church multiple times a week and most of us don’t have the means to travel out of our village. Please pray for us.”

Two days earlier (19 May), the government-appointed committee (pictured) approved the legalisation of a sixteenth batch of churches and affiliated buildings, numbering 70 and bringing the total approved for legalisation in recent years up to 1,638.

The committee first met in October 2017, following the passing of the Law for Building and Restoring Churches in August 2016. Before the law was passed, it was almost impossible for Egyptian churches to obtain permission from the government to construct or repair buildings, leaving many Christians with no option but to meet for worship in unlicenced premises, where they were sometimes attacked by Muslim mobs. A total of 3,730 churches made applications under the 2016 law. Legalisation becomes final only when approved churches comply with provisions of structural soundness and civil defence conditions, and pay the required dues.