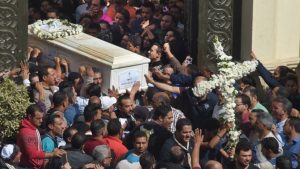 At least seven Christians were shot dead and 19 were injured in a terrorist attack on two buses carrying Coptic pilgrims to a monastery in Minya province on Friday 2 November. Islamic State later claimed responsibility through its Amaq news agency.

Six of the dead were from one extended Coptic Orthodox family, including a 15-year-old boy and a 12-year-old girl. Hundreds of mourners gathered at their funeral on Saturday in Minya city, 260km south of Cairo. The seventh victim, an Anglican bus driver, was buried on Friday evening in a village outside Minya.

Two church-owned buses were travelling to the Monastery of St Samuel the Confessor in Minya province on Friday afternoon when masked Islamist gunmen in four-wheel drive vehicles pulled out of side roads and opened fire on the buses. The attack took place at the same location as a previous bus attack on 26 May 2017, in which Islamist militants killed thirty Copts and wounded 25 others travelling to the same monastery.

Fr Abanoub Shehata, a priest in Minya’s Maghagha diocese, told Open Doors International: “The big bus belonged to a church in Sohag. The driver managed to escape the scene and no one in that bus got hurt. The second, smaller bus, came from a village in Minya and did not manage to escape. The terrorists stopped the bus and opened fire on the passengers.”

International Christian Concern quoted a local Christian identified only as Mina, who reported, “The micro-bus was from my church. The gunmen shot the men in their head and some of the injured are women. They had a nervous breakdown of what they have seen and they are in the hospital. Some women also were killed.”

“Why were they not protected?” asked Emad Nasif, a deacon in a Minya church. “There seems to be an indifference to the safety of the Christian minority.”

Hanaa Youssef Mikhael, whose husband died in the 2017 bus attack, said: “I am very sad about what happened. And I am startled: How is it possible that this happened again?”

Timothy E. Kaldas, an analyst with the Tahrir Institute for Middle East Policy, commented: “The Islamic State has successfully executed an attack on the same road, next to the same monastery, one year apart. That really calls into question the quality of government efforts to enhance security, particularly in Minya, where the Christian minority has been targeted relentlessly… Life has gotten more difficult, and security has not been delivered.”

The Egyptian government has pledged compensation for the families of Christians who died in the attack and financial assistance for medical treatment for survivors.

The militants disappeared into the desert following the attack but were pursued after members of the police and the army arrived at the scene.

On Sunday 5 November, Egypt’s interior ministry stated that its forces had exchanged fire with “terrorist elements” they had pursued to a mountainous area in the west of the province and stated that they had killed nineteen Islamist militants who were involved in the attack. The ministry posted pictures of bodies it claimed were dead militants, with weapons found in their possession. The pictures also showed a tent in which the militants were said to have been hiding and Islamic State propaganda beside the bodies.