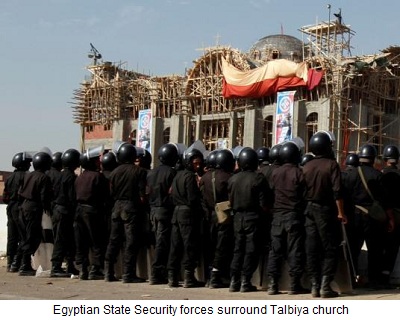 Four Copts were killed and at least 50 were hurt last week when members of a church in Talbiya, Giza, clashed with security officials trying to stop their building work.

The violence began at 3am on 24 November when nearly 5,000 security officers surrounded a site where a community centre is being built on the property of St Mary’s Church.

This was the security forces’ third attempt to stop construction in less than a fortnight and 200 Copts, including women and children, were keeping a vigil inside the church.

Security forces first attacked the site of the Coptic Church of St Mary and St Michael on 11 November and stopped construction work at its community centre. The church is situated in Talbiya in Giza, south of Cairo, and serves an area that is densely populated by Christians but does not have enough church buildings to accommodate them. The reason given by the authorities for the stoppage was that the work was not in accordance with the drawings presented. The church leaders insist that they have all the necessary construction permits.

Construction work was in the final stages, with the builders completing the roof. A spokesman of the ruling National Democratic Party said that the local authorities took action when they saw “a dome” rising over the building. Priests and members of the church were inside when the security forces surrounded it. The authorities eventually withdrew.

On 22 November, security forces stormed the church a second time to stop construction, besieging the building from midnight to 6am. They confiscated four concrete mixing vehicles containing mixed concrete, all of which was spoiled, at great cost to the Coptic community. The security forces withdrew after a standoff. One of the building contractors said, “for the police officers and district officials to come so late at night, shows that what they are doing is wrong.”

The crisis escalated on 24 November. Security forces surrounded the site at 3am, while builders were working on the roof and 200 people were keeping vigil inside. The security forces used tear gas, rubber bullets and live ammunition, and angry Christians hurled stones. Four church members were killed and 68 were wounded, many seriously. The medical care provided to some of them has been very poor.

It is estimated that at least 2,000 local Copts came to demonstrate after they heard that the security forces had halted the construction work. At least 200 Christians were arrested, accused of possession of explosives, attempted murder of police, sabotage and assault. They have been denied access to lawyers. About 20 police officers were injured.

The authorities claim that the church leaders have a permit to expand property owned by the church, but not to erect a church building: they consider that the appearance of the extension suggests that it will be used as a place of worship, which would require a separate permit. Because of the difficulty in obtaining church building permits in Egypt, the extension of church property to form places of worship is sometimes resorted to, and has been tolerated by some local officials.

The President of the Egyptian Union of Human Rights, Dr Naguib Ghobrial, issued a statement on 22 November, calling for the dismissal of the local authority chief who issued the order. “The church has all the permits,” he said. “By this behaviour the chief of the local authority is encouraging Islamists to fight with the Christians because of the Church and therefore causing sedition.” (AINA, Almasyalyoum, AP, Assist News Service, Irish Times, Middle East Concern, Release International)