Twenty Coptic Christians who had been held captive for over a month have been murdered by Islamic State militants. An unidentified man of African descent was beheaded with them.

On 15 February, a media arm of Islamic State released a propaganda video showing the ceremonial beheading of the men on a rocky beach.

The video bore many similarities to previous videos of murders of Western hostages committed in Iraq and Syria (the victims are dressed in orange jump suits, while one of the oppressors speaks to the camera in English) and seems designed to show the expansion of Islamic State terror.

The religious motivation for the murders is clearly displayed in the video, which is titled “A Message Signed With Blood to the Nation of the Cross”.

The lead executioner speaks in fluent English with an American accent, and his words are translated in Arabic subtitles: “Oh, people, recently you have seen us on the hills of as-Sham and Dabiq’s plain (Arabic terms for places in and around Syria), chopping off the heads that have been carrying the cross for a long time. Today, we are on the south of Rome, on the land of Islam, Libya, sending another message.”

A caption on the five-minute video reads: “The people of the cross, followers of the hostile Egyptian church.” The spokesman says the beheadings are revenge for “Muslim women persecuted by Coptic crusaders in Egypt”. While pointing towards the sea with his dagger, the masked speaker vows to “conquer Rome.”

Seven of the victims were kidnapped in the coastal city of Sirte on 30 December while thirteen more were kidnapped in the same city on 3 January, when a group of 15 militants burst into a housing complex and went from door to door calling for Christians by name, and forcing Egyptian Muslims living in the complex to lure the Copts out of their rooms. An eyewitness said: “They had a list of full names of Christians in the building… while checking IDs, Muslims were left aside while Christians were grabbed. I heard my friends screaming.”

Al Azhar, the main Islamic university in Egypt, also sent its condolences to Pope Tawadros II and denounced the killing of the Copts, describing the killing as an “ugly criminal act” and expressing its deep grief and sorrow.

Al Azhar emphasised that this “barbaric and savage act” does not fall within the context of Islamic religion, nor any other religion, in addition to being “inhuman”, and added, “The killers deserve a curse from Allah.”

The Council of Egypt Churches issued a statement in which it offered the Church’s condolences to the entire homeland. The statement said: “We leave it to the Divine Judge of the whole world to work justice,” and said the Church was praying for all Egypt, the unity of her people, and peace for her lands.

In el-Aour, a poor village some 200 kilometres south of Cairo and home to 13 of the hostages, friends and family assumed the worst on Thursday (12 Feb) when a still photo of the men was published showing them kneeling on the beach – each flanked by a knife-wielding militant. The community was engulfed in sorrow. Men covered their heads with dirt in a sign of both grief and shame while women slapped their own faces or let out heart-wrenching shrieks of pain.

Villagers accused the Egyptian government of doing little to help the captives. The authorities, they say, were able to free Muslim Egyptians abducted in Libya in recent months but had done nothing to save the 21 because they are Christian – an accusation rooted in the deep sense of religious discrimination felt by most Egyptian Copts.
Samuel Welson’s family immediately recognized him from the picture. “Look at my love. Look how beautiful he is,” Samuel’s mother, Ibtassal Lami (pictured), said through tears as she cradled a photo of her son. “He only went there to earn his living.” 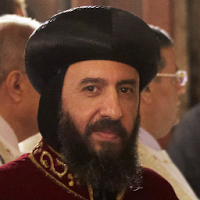 In a statement, Bishop Angaelos, General Bishop of the Coptic Orthodox Church in the UK (pictured) said:

“It is with deep feelings of sorrow and pain that we received confirmation of the brutal murder of Coptic Christians in Libya at the hands of Daesh (IS). While every life is sacred and every death tragic, the particular brutality demonstrated in this instance and others like it shows not only a disregard for life but a gross misunderstanding of its sanctity and equal value in every person.

“Our prayers are particularly with the families of these young Coptic men, who were fathers, brothers, sons and friends of many within their tight-knit rural communities, in which their absence will cause significant loss and sorrow. Their families are not only deprived of breadwinners who had travelled to Libya to support them, but of the joy that they bring when they return.

“While it may seem illogical or incomprehensible, we also pray for those who have carried out these horrific crimes, that the value of God’s creation and human life may become more evident to them, and in this realisation, that the wider effects of pain brought by this and other acts of brutality may be realised and avoided. We pray for an end to the dehumanisation of captives who become mere commodities to be bartered, traded and negotiated with.”