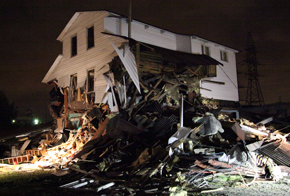 Demolition workers, accompanied by police and civil volunteers, broke into Holy Trinity Pentecostal Church in Moscow’s Eastern Administrative District shortly after midnight on 6 September and demolished most of the three-storey building.

The demolition workers cut telephone lines and seized the mobile phone of the caretaker, who was taken to the police station and held for three hours, during which she was not allowed to contact other church members. Two mechanical diggers began to demolish the building.

Church members reported that men who called themselves druzhinniki (civil volunteers) circled the site. As members began to arrive, the civil volunteers refused to allow them access, and behaved aggressively. A car was destroyed, a safe was broken open and valuables were taken away, including a generator, a mixing desk with microphones, musical instruments, chalices and service books. Witnesses reported that a hail of stones rained down on church members trying to take photographs. Once the demolition workers had gone, members spent several hours digging in the ruins to save what they could, including books and items of furniture.

The following Sunday (9 September) more than 200 church members gathered to hold their morning service amongst the ruins of the building. They stood with umbrellas worshipping God, listening to Pastor Romanyuk preach and praying for the Russian authorities. Several banners were hung on the remains of the church’s structure, including one that said, “The Building demolished – the Church is ALIVE”.

The service was disrupted by police who called it an “unsanctioned demonstration”. Pastor Romanyuk asked the police captain why this particular meeting was unsanctioned and meetings in the previous weeks, months and years were not. The police officer replied: “I understand your point. The command to act has been handed down to me from ‚Äòabove’. I must comply.” Pastor Romanyuk was taken away by the police for questioning but was later released.

Mikhail Odintsov, an aide to Russia’s Ombudsperson for Human Rights, told Forum 18 (a Christian news agency that reports on violations of freedom of belief): “This is the Soviet approach – to come in the middle of the night with mechanical diggers. This is unacceptable.” He said that church members are expected to lodge a written appeal to Ombudsperson Vladimir Lukin about the church destruction.

Andrei Ivanov, press secretary to the Prefect of Moscow’s Eastern Administrative District, defended the demolition: “There was a court decision. Everything was done at the decision of the court.” He did not know which court had made the decision. The duty officer of the district police said, “Our officers were there to defend public order.”

Holy Trinity Church was established in the 1970s by Serafim Marin, a Pentecostal Christian who had spent 18 years in Soviet labour camps for his faith. At first the church met in secret. It gained registration with the Soviet authorities as an autonomous Pentecostal community in the late 1970s.

In 1992 Moscow’s city government authorised Holy Trinity Church to locate in the outlying district of Novokosino, and ordered a plot of land to be reserved for it there. According to the Pentecostals, the authorities subsequently withheld permission to build on the plot.

The city authorities forced Holy Trinity Church out of its first building in 1995; the replacement “temporary” church – bulldozed on 6 September – was built in 1995-6. Officials consistently refused to legalise the building and prevented it from being linked to the water and electricity supply and sewerage. Moscow’s Land Resources Department annulled its land rental agreement with the church in 2005.

In 2010 the public prosecutor of Moscow’s Eastern Administrative District filed suit against Holy Trinity, demanding that the church remove all construction from and vacate the site. The demand to remove all construction was successively upheld by the district court (September 2010), Moscow City Court (November 2010) and Russia’s Supreme Court (May 2011). The Supreme Court ruling claimed that Holy Trinity was occupying “disputed land without any legal basis” and did not fulfil its construction targets within the time limit for which it was allotted land. In October 2011 Moscow Arbitration Court ruled that the Pentecostals must pay the city’s Land Resources Department damages of 4,888,271 Roubles (€120,000) for unlawful land use. 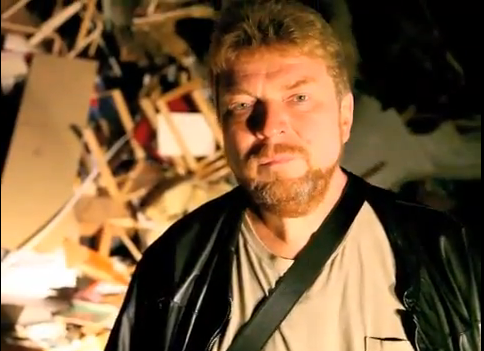 Pastor Romanyuk (pictured among the ruins of the church building) and the congregation have long fought to save their church from confiscation and destruction, and put a lot of their resources into the building. He said that the church had no official warning of the destruction. “In late August a district official told us verbally and unofficially that they would go ahead with the destruction by 15 September,” Pastor Romanyuk told Forum 18. “We didn’t believe they would just do this.” He said that he was woken in the early hours and rushed to the site to try to halt the destruction, but was too late. “The workers didn’t say who they were or who had sent them. They showed no documents. They did all this with the protection of the police, so some state body must have done this.”

One member of Holy Trinity said that the Russian government is forcibly relocating churches, giving them land in more remote areas to build new churches. He explained that the usual conditions are that the church builds within some specified time period. In order to build, permits are needed, which are often denied. When a congregation fails to meet the deadline, the land is repossessed and everything built on it becomes government property.

Human rights groups say that the Holy Trinity congregation tried to meet the city’s legal requirements. It is among many [evangelical] churches forced out of Moscow in recent months. Some Christian leaders fear these incidents are evidence that religious freedom is fading in Russia. (CBN, Forum 18, GCMM)

Church in Chains has written to the Russian Ambassador to Ireland expressing deep concern on behalf of Irish Christians at the demolition of the church building and asking that alternative land or a building (acceptable to the church) is given to the church for a meeting place.