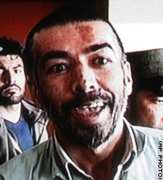 Abdul Rahman, who faced the death penalty for converting from Islam to Christianity, is to be sent to Alaiabad hospital in Kabul for ‚Äúpsychiatric evaluation‚Äù where he could be examined by American doctors. The news comes after weekend reports that the case had been dropped by the Afghan judge due to questions over Mr Rahman’s mental state.

“Until he is completely healthy we should send him to hospital for treatment and it is possible that the treatment could be done inside or outside Afghanistan,” Mr Sarinwal Zamari (a prosecution lawyer) said.

Abdul was moved to the high-security Policharki prison in Kabul on Friday after being threatened by prisoners at the jail where he had been previously held. During Friday prayers in Kabul, a senior Muslim cleric called for the death penalty to be carried out and threatened that if Abdul were released, ‚ÄúWe will call on the people to pull him to pieces so there‚Äôs nothing left.‚ÄùMore than a thousand protesters took to the streets in the northern city of Mazar-e-Sharif this (Monday) morning – demanding that Abdul be executed for converting to Christianity.

During his trial earlier this month, Abdul was asked in court, ‚ÄúDo you confess that you have apostasised from Islam?‚Äù The defendant answered, ‚ÄúNo, I am not an apostate. I believe in God.‚Äù

He was then questioned, ‚ÄúDo you believe in the Quran?‚Äù Abdul responded, ‚ÄúI believe in the New Testament, and I love Jesus Christ.‚Äù Abdul testified that he had become a Christian 16 years ago, while working with a Christian relief organisation in the Pakistani city of Peshawar, near the Afghan border. But after his conversion, Abdul‚Äôs wife divorced him, so their two infant daughters were taken back to Afghanistan, where they have been raised by their paternal grandparents.

Soon afterwards Abdul left Pakistan, and over the next few years he managed to enter several European countries. Although he attempted to apply for asylum, he was never able to obtain legal immigration status. After nine years, many of them in European detention centres because he had no valid papers, he was finally deported back to Afghanistan in 2002. Back in Kabul, Abdul eventually contacted his family. In recent months, he tried repeatedly to regain custody of his daughters, now 13 and 14 years of age.

‚ÄúThe father finally went to the police in order to stop Abdul from contacting him, by telling them that Abdul converted to Christianity,‚Äù a Kabul source said. He was promptly taken into custody, interrogated and sent to jail to await trial.

Elsewhere in Afghanistan, during the past two weeks, two other Afghan Christians have been arrested. Because of the sensitive situation, local sources requested that the location of the jailed converts be withheld. Also, in March, one young Afghan convert to Christianity was beaten severely outside his home by a group of six men, who finally knocked him unconscious with a hard blow to his temple. He woke up in the hospital two hours later but was discharged before morning. ‚ÄúOur brother remains steadfast, despite the ostracism and beatings,‚Äù one of his friends said. Several other Afghan Christians have been subjected to police raids on their homes and places of work in the past month, as well as to telephone threats. (Sources: BBC, Financial Times, Compass Direct)