The ongoing persecution of Christians in India continues to be documented by Church in Chains partner, Persecution Relief, which reports several persecution incidents each week. The widespread nature of persecution was vividly illustrated by three incidents that occurred in different states on Sunday 3 February. 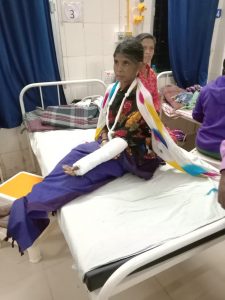 The first incident took place in the remote village of Chote Markeli, Chhattisgarh state, in central India where 15 church members were brutally beaten up at a 10am Sunday worship service. While the service was underway, Hindu militants and local villagers gathered outside the church building and started shouting slogans. Subsequently they trespassed into the church, vandalising the premises and rounding up terrified church members in an open area. The mob shouted: “Deny Jesus or die!” When the Christians refused to recant their faith, they were brutally and indiscriminately attacked. Children had to watch in horror as their parents were beaten up – one woman, known as Sister Bundi (pictured), was left with a broken hand which required surgery and several people sustained serious head wounds. Following the attack, local Christian leaders contacted the police and reported the incident. The police assured them that they would take action against the perpetrators and increase security in the area. 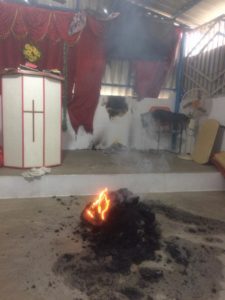 Several hours earlier on the same day an Assemblies of God church in Musiri Taluk in the southern state of Tamil Nadu state was badly damaged in an arson attack. Pastor Edwin Joseph and his wife arrived at the church for a 5am prayer meeting to find the building covered in smoke and on fire. The pastor and his wife, together with some church members and neighbours, managed to put out the fire before it destroyed the whole building. Pastor Edwin stated that there was no precedent of any anti-Christian behaviour in the area, but he believes this to be an arson attack as there was no other explanation for the fire. The church building, where 150 people have regularly been gathering for worship, will require reconstruction and all electronic equipment and instruments will need to be replaced. Persecution Relief estimates the repair to cost around 500,000 Indian Rupee (€6,240).

Church closed down in Bihar 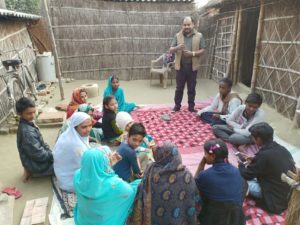 On the same Sunday, Fellowship Baptist Church in Kuchaikote, Bihar state, in eastern India was effectively shut down. A week prior, on 26 January, India Mission had organised a meeting in a nearby village which members of Fellowship Baptist Church attended. One unidentified person attended this meeting and shared photographs from it on social media, claiming that “conversion activities” had taken place. During the week Pastor Jacob Mani and Brother Rajkiran (who had hosted some prayer meetings in his house in the past) were visited in their homes by at least one militant. They were both berated, intimated  and threatened with dire consequences if they held any more meetings in the village. On Saturday 2 February, Pastor Mani received a message warning him the Sunday morning service of his church would be attacked. The next day the landlord of the rented premises where the church was meeting was pressurised by militants not to allow the Sunday service to go ahead. Pastor Jacob reported that his congregation is terrified to gather due to the ongoing threats.

Shibu Thomas of Persecution Relief is asking Christians “to be united in one Spirit and stand with the Persecuted Church in India” and pray specifically for “the Christians who have been attacked in the village of Chote Markeli, as they return to pick up the pieces of their lives, for them to have the spirit of forgiveness, so that Jesus Christ may receive all the glory and honor He deserves through their lives.”