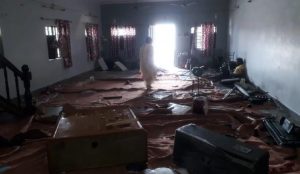 Five people were injured when a mob of over two hundred Hindu extremists attacked a church in Uttarakhand state, northern India, on Sunday 3 October.

Armed with iron rods, the mob burst into a church in Roorkee, Haridwar district, at 10 am as the morning service was beginning and carried out an attack that lasted over forty minutes. The attackers beat the Christians, vandalised furniture and musical instruments, damaged CCTV cameras and destroyed a mobile phone that was being used to live stream the service – the photo shows the interior of the premises after the attack. Three women sustained serious injuries and had to be rushed to hospital in the state capital, Dehradun.

The extremists explained their actions by saying that they suspected some religious conversion-related activities were going on in the area.

Pastor Prio Sadhana Lanse told The Wire that the mob went on a rampage and smashed everything that came their way. “The frenzied mob, shouting slogans… barged into the church, which is on the first floor of the building,” she said. “They started beating our volunteers and the women attackers bashed up our womenfolk.”

The pastor told the Times of India, “The prayer was about to begin. Around ten people were present when the crowd, many of whom we recognised as members of Bajrang Dal and other right-wing groups, stormed the church and started beating us and damaging the church property. We know most of the attackers as they keep threatening us to shut down the church. We demand strict action against them. We also want police protection to be provided to us.”

After the incident, police protection was provided outside the church premises and two police officers were stationed at Pastor Lanse’s house nearby. The pastor registered a First Incident Report (FIR) against at least six identified persons (four women and two men) and two hundred unidentified persons and told police that the attackers belonged to the local Vishwa Hindu Parishad (VHP), the Bajrang Dal and the youth wing of the Bharatiya Janata Party (BJP) – all organisations that promote the nationalist Hindutva ideology.

The pastor’s FIR was filed under sections of the Indian Penal Code that deal with defiling a place of worship, disturbing a religious assembly, robbery by an armed gang, voluntarily causing hurt, insults which disturb the public peace, criminal intimidation and mischief causing damage.

BJP state president Madan Kaushik denied that party members were involved and claimed that local residents had reacted angrily to the church premises being used for the conversion of Hindus. He said “acts of conversion” had been reported in the area and added, “Conversion by force or by luring any person will not be tolerated in Uttarakhand. We have a strict law for it.”

Similarly, the general secretary of the district unit of the BJP, Adesh Saini, stated: “We condemn the incident but it is also true that residents of the locality have been cautioning against religious conversions.”

Uttarakhand is one of eight Indian states in which anti-conversion laws are in force. These laws are intended to stop Hindus being converted to other religions by “force, fraud or allurement” but extremists use them as a licence to attack Christians and falsely accuse them of forcing or bribing Hindus to convert.

The day after the attack, a local woman registered a FIR against Pastor Lanse and nine other church members in which she alleged that she had been offered money and a job if she converted to Christianity. She also said, “They abused us, thrashed us and robbed our cash and jewellery when we refused.”

The pastor rejected the accusation and pointed out that as a retired teacher and widow she was in no positon to offer payment for conversion. She explained, “After retirement I am managing everything from my savings and pension. The allegation that we are luring people with money for conversion is politically motivated because elections are just round the corner.”

A senior police officer told The Wire that the FIR registered against Pastor Lanse was dubious and said, “Today, our team has accessed the CCTV footage from a house close to the church. The second FIR appears to be bogus and we will cancel it in due course of time.” He added that all those named in the pastor’s FIR for attacking the church were being traced and that arrests were imminent.

Pastor Lanse is the widow of former pastor D.R. Lanse, who died of Covid last year, and lives near the church premises with her two daughters. Rev Titoo Peter of the Methodist Church told UCA News, “The church that was attacked has been active for the past 30-40 years. It was run by Pastor Lanse who died last year due to Covid-19. His wife and relatives are now running the church.”

He said Christians in Roorkee enjoyed good relations with people of other faiths and that this was the first incident of a church being attacked. “It is the handiwork of some bad elements,” he said, “who do not want peace and harmony in the area.”