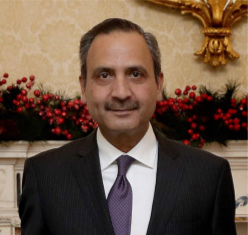 Mr Sardar Shuja Alam  (Ambassador of Pakistan) has said he believes that Pakistan’s government cannot immediately reform the country’s blasphemy laws because “it is going to take time to change attitudes”.

Ambassador Alam made the comments during a meeting at the Embassy of Pakistan in Dublin with David Turner (Director, Church in Chains) and Susanne Chipperfield (Operations Co-ordinator, Church in Chains). The meeting had been sought by Church in Chains “to discuss our concerns at the continuing misuse of the blasphemy law in Pakistan and the disproportionate effect that this has on religious minorities including Christians”.

David Turner presented the Ambassador with a copy of the Church in Chains Global Guide and explained the work of Church in Chains as an independent Irish organisation. He went on to say that for many years Church in Chains has been concerned for Christians in Pakistan suffering because of the misuse of the blasphemy laws. He recalled that he last time Church in Chains was at the embassy (November 2018) had been in connection with a vigil for Asia Bibi. 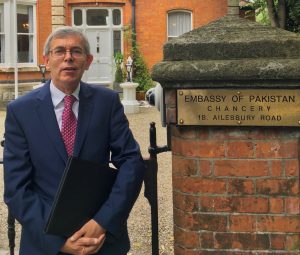 David Turner stated that when the Supreme Court acquitted Asia Bibi in October 2018, the government did not support its verdict but rather gave in to the demands of violent extremist protestors, resulting in the long delay before Asia Bibi was finally allowed to leave the country six months later. Ambassador Alam disputed that the government had not backed the decision by the Supreme Court in the Asia Bibi case. He said  the delay was only due to security precautions having to be put in place and that the government had waited for a time when law and order in the country were settled before she was allowed to leave.

Background to the Blasphemy Laws

Ambassador Alam said that the blasphemy laws date back in history and the severe penalties (including the death penalty) introduced by General Zia in 1982 have to be considered in the context of the Islamic Revolution in Iran in 1978/79, the Soviet invasion of Afghanistan, the rise of the Taliban and war in Afghanistan. Ambassador Alam said he is from the city of Peshawar (in the north western province of the country) and that the whole fabric of society has been changed by millions of refugees who have come from neighbouring Afghanistan. The country has still not recovered from this.

Regarding the blasphemy laws, he wanted to point out that more Muslims have been accused than Christians, although David Turner countered by saying that religious minorities had been disproportionally affected by the laws.

David Turner said that he would like to see a stronger commitment from Imran Khan to deal with the misuse of the blasphemy laws. He stated that Imran Khan had supported the laws in his election campaign to appeal to more conservative voters. Ambassador Alam said that Imran Khan’s supporters are urban, middle-class citizens with a liberal outlook on Islam. The current government has entered into peace talks with the Taliban, but decades of destruction have left serious effects on Pakistan.

Operation of the Blasphemy Laws

David Turner pointed out that many innocent Christians are suffering under the blasphemy laws because of the long delays in listing cases and scheduling appeals, including many adjournments that are typical of the way in which the laws are being operated.

He said that the word that keeps coming up when he speaks to partners in Pakistan is fear. There is fear among the minorities and fear in the judiciary system. It results in cases being moved from one court to another, while innocent people are languishing in jail for many years.

Ambassador Alam said that he is aware of the misuse of the laws in Pakistan where they are used in property disputes and other small altercations. In his view, most of the disputes should not go beyond the local police station.

David Turner asked Ambassador Alam if he could encourage his government to take action in four specific cases of Christian prisoners who have all suffered long adjournments of their cases. He handed Ambassador Alam a table with a list of dates from the cases of Zafar Bhatti, Shagufta Kausar and Shafqat Emmanuel, Imran Ghafur Masih and Sawan Masih (pictured). All these cases followed the same pattern of spurious accusations, lack of evidence, arrests, delays, appeals and adjournments. He referred to Zafar Bhatti’s case, which was adjourned the previous week because the judge had made holiday arrangements. The same judge had previously said that there is no case to answer. An acquittal would have caused paper work, which he was not prepared to deal with as it would have delayed his holiday.

Ambassador Alam asked for more information on these cases, so David handed him the relevant prisoner profiles from Church in Chains’ website. Ambassador Alam promised to pass on the details to the human rights unit of the Pakistani government. He said that he would push that these cases would come to their logical conclusion and the Christian prisoners would be freed.