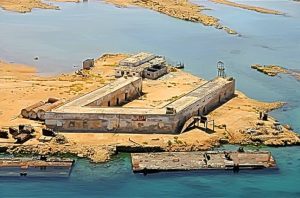 Fourteen Christian men have been released after four years in Nakura prison (pictured) in the Dahlek archipelago while 22 Christian women, arrested at a prayer meeting in March, have been freed from Mai Serwa prison.

The fourteen Christian men released from Nakura prison were part of a large group of Pentecostals who were arrested in the summer of 2017 on the direct order of President Isaias Afewerki, most of them from towns around the Red Sea area. They were taken from their homes, offices, military service and the street and a group from the capital Asmara was taken from a wedding.

The release of the fourteen men follows the release of 21 Christian women from Nakura prison in February. As is typical in Eritrea, no reason has been given for the releases and the released prisoners had never faced trial. It is believed that twelve male Christian prisoners remain in Nakura.

The release of the 22 Christian women from Mai Serwa prison just two weeks after their arrest at a prayer meeting in the Eritrean capital Asmara is unusual. There is no information available yet about their wellbeing and it is unclear why they were released so soon after their arrest, but it does not necessarily represent a change of heart on the part of the Eritrean government. It has emerged that a Christian man who was also arrested at the Asmara prayer meeting has not been released.

Another twelve Christians who were arrested at a prayer meeting in a house in Assab, 1060 km southeast of Asmara, in late March are still being held in a nearby prison where conditions are known to be harsh.

In the past six months around 216 Eritrean Christians imprisoned for their faith have been released (including the 36 released recently). There are now an estimated 130 Christian prisoners in state jails in Eritrea, but many army conscripts have also been imprisoned for practising their faith, perhaps as many as 150.