In the past two weeks at least 83 more Christians have been released from Eritrean prisons, including Aklilu Desbele (left) and Mussie Eyob   (centre), and Church in Chains has learned that Twen Theodros (right) was released in late 2020.

Mussie, Aklilu and Twen were released from Mai Serwa prison near the Eritrean capital, Asmara. Mussie had been in prison since 2011, Aklilu since 2008 and Twen since 2005.

On 4 December the authorities also released 24 Jehovah’s Witnesses, including three high-profile conscientious objectors whose cases had been highlighted by the UN Special Rapporteur on Eritrea to the UN Third Committee in New York in October 2020.

It has been reported that only about 150 Christians now remain in prison in Eritrea and while the reason for the releases is unclear it has been suggested that they are an attempt by the authorities to deflect international attention from the involvement of Eritrean troops in the war in Ethiopia’s Tigray region. 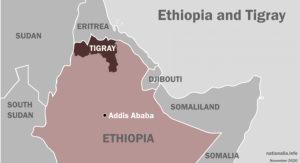 In November 2020, the Prime Minister of Ethiopia, Abiy Ahmed, ordered the Ethiopian Army to move into the Northern Tigray Regional State (which borders Eritrea and in which 96,000 Eritrean refugees lived, including many Christians), and impose a state of emergency by force. Heavy fighting with the Tigrayan People’s Liberation Front (TPLF) has continued since and though the region has been cut off from communication, it has been claimed that over 50,000 people have been killed in the fighting.

There have also been many reports of Eritrean troops crossing the border, seemingly with the knowledge and approval of the Ethiopian government, and attacking refugee camps holding Eritrean refugees. Many Christians who had fled persecution in Eritrea had settled in the region, either in the refugee camps or in local communities. One group of Christian refugees was attacked by Eritrean troops while on their way to attend a church service.

Eritrean troops have forced many Eritrean refugees to march back to the Eritrean border, where they have been taken by truck back to the country from which they had escaped, in direct contravention of international law.

Two refugee camps in Tigray (Shimelba and Hitsat) were completely burnt down by Eritrean forces. According to the UN High Commissioner for Refugees, Filippo Grandi, approximately 20,000 refugees from Shimelba and Hitsat camps are currently missing.