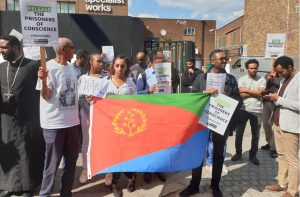 “Release the Prisoners of Conscience” was one of the main cries at the annual protest vigil outside the Eritrean Embassy in London on Thursday 23 May.

“Yiakl” (meaning enough) was also chanted by many protesters, referring to the long period of persecution of Christians in Eritrea. Participants held placards saying “17 years is too long” – a reference to the Eritrean government’s decision in 2002 to close down all churches in the country apart from Orthodox, Lutheran and Roman Catholic churches (which operate under strict government control).

For the first time, the annual vigil (jointly organised by Church in Chains, Christian Solidarity Worldwide, Human Rights Concern Eritrea, Medhane Alem Eritrean Orthodox Church and Release Eritrea) was met with a large counter-demonstration organised by the Eritrean Embassy across the street. This demonstration was ostensibly held to mark Eritrean Independence Day but its timing (one day in advance of the actual date) and other factors made clear that it was organised to frustrate and overshadow the annual vigil in support of religious freedom in Eritrea. Before the vigil, several male counter protestors approached the organisers and told them to “leave this area because there are many more of us than you”. However, far from being intimidated by the counter-demonstrators, Eritrean Christians present at the vigil expressed encouragement at the opportunity to highlight the lack of religious freedom in Eritrea to an audience of government supporters. 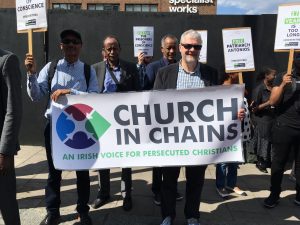 The protest vigil was introduced by Mervyn Thomas (CEO, Christian Solidarity Worldwide) and led by David Turner (Director, Church in Chains). The vigil featured short speeches by Father Shenouda (Medhane Alem Eritrean Orthodox Church) about the Eritrean church and Christian prisoners, Dr Berhane Asmelash (Release Eritrea) about the Eritrean government and Elsa Chyrum (Human Rights Concern Eritrea) about Eritrean refugees and trafficking victims. Elsa said: “Nothing has changed in Eritrea since the rapprochement with Ethiopia. They are fleeing from imprisonment without trial, torture, persecution, and above all the lifetime national service for every young man or woman over 18 years of age”. Each speech was followed by fervent prayer and relevant Bible readings were also part of the vigil programme. 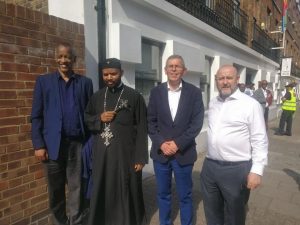 A letter signed by the leaders of the four organising groups, addressed to the Eritrean Ambassador to the UK and Ireland, Mr Estifanos Habtemariam Ghebreyesus, was presented to an embassy employee at the door of the embassy. The letter expressed dismay at “the unjust ongoing imprisonment without charge or trial of tens of thousands of Eritrean citizens, including hundreds of Christians detained solely on account of their faith.” It made special mention of the arrest of 141 Christians earlier in May in the Mai Temenai district of Asmara and expressed deep concern at the continuing detention of Abune Antonios, the elderly Eritrean Orthodox patriarch (now aged 91) who remains under house arrest. The letter also referred to eight Protestant pastors who were detained arbitrarily and have been held incommunicado for over a decade. The letter concluded with a call for “for the full enjoyment of religious freedom for all of Eritrea’s faith communities, and for the unconditional release of every prisoner of conscience”.