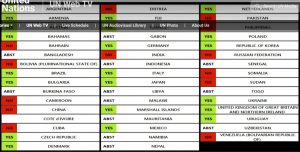 On 12 July the UN Human Rights Council (HRC) passed a resolution extending the mandate of the Special Rapporteur on the situation of human rights in Eritrea for another year.

The resolution calls on Eritrea to “cooperate fully with the Special Rapporteur, including by granting him access to the country and committing to making progress on the benchmarks proposed by the previous mandate holder” and mandates the Special Rapporteur to present updates on the situation of human rights in Eritrea at the 49th and 50th sessions of the HRC and at the 76th session of the UN General Assembly.

The resolution was passed by a vote of 21 in favour to 13 against, with 13 abstentions. Only the 47 member states of the HRC, elected for three-year terms, are permitted to vote on HRC resolutions, but resolutions can be supported by countries that are not elected members (and are thus ineligible to vote), and in this case the resolution was sponsored by 38 countries.

Welcoming the resolution, Dr Khataza Gondwe, Head of Advocacy at Christian Solidarity Worldwide, commented that “The people of Eritrea continue to suffer the most appalling human rights violations at the hands of their government” and urged the government of Eritrea to cooperate fully with UN Mandate Holders and with the Office of the High Commissioner for Human Rights (OHCHR).

Eritrea has refused to cooperate with successive mandate holders.

“No tangible signs of progress”

Special Rapporteur Mohamed Abdelsalam Babiker (pictured) was presenting his first report to the HRC since taking up the role in November 2020; his report covered the period from 5 May 2020 to 28 April 2021.

On 21 June 2021, the HRC held an interactive dialogue with Dr Babiker, who said that since he started his mandate there had been no tangible signs of progress or concrete evidence of improvement in the internal human rights situation in Eritrea.

He said that Eritrea had not yet put in place a minimum institutional and legal framework to uphold human rights standards and that serious human rights issues persisted, including the use of arbitrary and incommunicado detention, inhumane prison conditions, and lack of freedoms of expression, opinion, association, freedom of the media and the right to participate in political and public affairs.

Dr Babiker welcomed the release of over one hundred Muslims, Orthodox Christians and Jehovah’s Witnesses over the reporting period but noted that faith groups were still being detained without being informed of the reason for their arrest and without charge and trial.

Irish statement to HRC on Eritrea

On 24 February 2021, Ireland’s Permanent Representative to the UN at Geneva, Ambassador Michael Gaffey (pictured), made a statement at the 46th session of the HRC, during the Interactive Dialogue on Oral Update by the Special Rapporteur on Eritrea, in which he thanked him “for bringing these important issues to the Council’s attention” and called on Eritrea “to urgently comply with its obligations under international law” and “to cooperate fully with your mandate and OHCHR”.

Ambassador Gaffey noted, “We are deeply troubled by Eritrea’s lack of compliance with its international human rights obligations. Over five years since the Commission of Inquiry’s findings in 2016, including that crimes against humanity had been committed in Eritrean detention facilities, military training camps and other locations, there has been minimal progress towards reform. Arbitrary arrests and incommunicado detention remain common, practices associated with national service continue to violate basic standards, and there is little space for independent civil society to operate.”

In 2016, the Commission of Inquiry mandated by the HRC found that crimes against humanity have been occurring in Eritrea in a “widespread and systematic manner” since 1991.