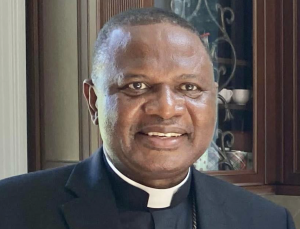 The Roman Catholic bishop of Ondo, Dr Jude Ayodeji Arogundade (pictured), has criticised President Michael D Higgins for suggesting climate change may have been a factor in the massacre of forty people at St Francis Xavier Catholic Church in Owo district of Ondo diocese, south-west Nigeria, on Sunday 5 June. The well-planned attack took place near the end of a Pentecost Sunday Mass.

In addition to those killed, over 120 people were injured by guns or bombs. The scale of the casualties led to widespread international condemnation including from President Higgins (pictured), who issued a statement in which he said that such an attack was made in a place of worship “is a source of particular condemnation, as is any attempt to scapegoat pastoral peoples who are among the foremost victims of the consequences of climate change. 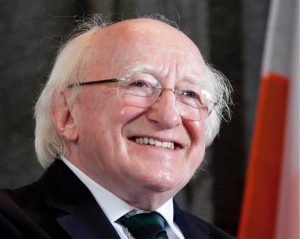 “The neglect of food security issues in Africa, for so long has brought us to a point of crisis that is now having internal and regional effects based on struggles, ways of life themselves.

“The solidarity of us all, as peoples of the world, is owed to all those impacted not only by this horrible event, but in the struggle by the most vulnerable, on whom the consequences of climate change have been inflicted.”

Dr Arogundade’s response on social media began by thanking President Higgins for his condolences but he then said that he wanted to “set the record straight”.

“The massacre at St Francis Church, Owo, has nothing to do with climate change and food security issues in Africa.

“To suggest or make a connection between victims of terror and consequences of climate change is not only misleading but also rubbing salt to the injuries of all who have  suffered terrorism in Nigeria.”

“The victims of terrorism and indeed all the people of Nigeria would be thankful if world leaders propose fruitful ideas to the government of Nigeria on how to protect the citizens and make Nigeria a safe place to live. This would be a better way of honouring the victims of hate and putting an end to the increasing killings.”

Responding to Dr Arogundade’s statement, a spokesman for Mr Higgins told The Irish Times, “The President’s comments with regard to climate change related to the plight of pastoral peoples in the region and the President made no link in his statement between climate change and the attack itself. The President has utterly and unequivocally condemned the attack on St Francis Catholic Church in Owo, Nigeria and expressed his particular horror that such an attack could happen in a place of worship”. The spokesman said that President Higgins recognised “the long connections between Ireland and the diocese of Ondo and once again offers his deepest condolences and solidarity to the families of those who lost their lives in this horrific, indefensible action, and all those impacted by the attack.”

NOTE: Church in Chains has written to President Higgins’ spokesperson to point out that many attacks, like the attack in Owo, are explicitly religiously-motivated – targeting Christians as they gather together for worship and that, in many other attacks, perpetrators shout Allahu Akbar (the famous Muslim declaration often used as a battle cry by terrorists). Church in Chains also emphasised that language and the framing of a situation matters and highlighted the need to listen to the voice of the victims. 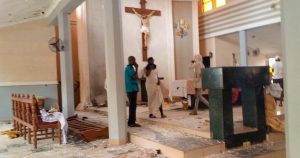 A priest at the church, Rev Andrew Abayomi, said that as the Pentecost Mass was coming to an end, the terrorists threw explosive devices on the church building and shot at worshippers. “We were in Mass when the terrorists attacked us,” he said. “They shot at the congregation while breaking into the church by throwing Improvised Explosive Devices at the church building. Some of us hid inside the church as they shot randomly at us. This lasted for about twenty minutes before they retreated.” Videos of the interior of the church showed bodies of victims lying in pools of blood across the floor and also bomb damage to the altar.

A police spokesman said that investigations had revealed that some of the gunmen were disguised as congregants, while other armed men had positioned themselves around the church premises from where they fired into the church. Police found three unexploded bombs inside the church building as well as fragments of ammunition from an AK-47 rifle.

The governor of Ondo state, Rotimi Akeredolu, described as a devoted Christian, wept as he visited the massacre site and again as he visited the survivors in hospital. He described it as a “black Sunday” in Owo, and said, “Our hearts are heavy. Our peace and tranquility have been attacked by the enemies of the people. We shall commit every available resource to hunt down these assailants and make them pay. We shall never bow to the machinations of heartless elements in our resolves to rid our state of criminals.”

The Catholic Diocese of Ondo has stated that the victims will be buried in a mass burial on Friday 17 June.

Who were the attackers?

Unusually, no group has taken responsibility for the attack. Boko Haram, Islamic State West Africa Province (ISWAP) and militant Fulani herdsmen have all been active in neighbouring Kogi State.

Adeyemi Olayemi, a local politician, said that Fulani terrorists were suspected as they were likely retaliating for grazing restrictions implemented in response to an increase in kidnappings in the state. “We have enjoyed improved security since herdsmen were driven away from our forests by this administration,” Mr Olayemi  said. “This is a reprisal attack to send a diabolical message to the governor.”

Four days after the attack, Nigeria’s Federal Government identified ISWAP as being responsible for the attack. Minister of Interior Rauf Aregbesola said security agencies were already on the trail of the culprits. He told reporters, “The National Security Council is concerned about the violent attack in Owo and have been able to locate the perpetrators of that horrendous attack. From all indications, we are zeroing in on ISWAP.

“It is not an ethno-religious thing, the animals in ISWAP, wanting attention and recognition, are suspected to have launched that attack. We have directed all the agencies concerned to go after them and bring them to justice.”  Minister Aregbesola stated that the group’s activity has nothing to do with Islam and said there was no ethnic agenda behind the attack, urging Nigerians to unite and defeat terrorism in the country.