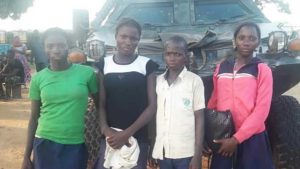 The six students and two staff members kidnapped from a Christian-run school in Kaduna state on 3 October were released on Saturday 26 October. Police did not say if a ransom was paid, but sources told Nigerian newspapers that a ransom of 13.6 million Naira (approximately €33,750) had been paid.

The teenage girls (four of them pictured), vice-principal and school matron had been kidnapped at gunpoint by suspected Muslim Fulani militant herdsmen. They were students and staff at Engravers’ College in Kakau Daji village, Chikun Local Government Area, near Kaduna city.

Kaduna State Police Command claimed its officers rescued the schoolgirls and teachers following an intelligence report, although parents have disputed this.

Police public relations officer DSP Yakubu Sabo issued a press statement in which he said, “Today being the 26th of October, 2019 at about 0800hrs, teams of Police Operatives attached to Operation Puff Adder Kaduna acted on intelligence and intercepted the kidnapped students and staff of Engravers College, Kakau Daji, Kaduna at Dutse in Chukun LGA. Consequently, all the eight victims of the kidnapping incident of 3rd October 2019 have been rescued unhurt and have been reunited with their respective families by the command. The command wishes to assure the general public that efforts are on to apprehend the perpetrators of this crime and bring them to book.”

State Commissioner for Internal Security and Home Affairs Samuel Aruwan confirmed that the students and staff had been released in a statement made available to the News Agency of Nigeria in Kaduna, but he did not state how the release had been achieved.

Contrary to the Kaduna State Police Command statement, parents said police did not rescue their daughters. Addressing journalists on 29 October, parents’ spokesman Ohemu Fredrick insisted that they were set free by their abductors after a ransom was paid. He commended a former state governor, saying that though the families had never met the former governor, he and his friends helped them to raise the ransom.

Ohemu Fredrick also said the former governor offered the girls and staff free medical treatment after their ordeal. “God used a former governor of Kaduna State to assist us; encouraged us,” he said. “We thank all Nigerians. We are in celebration mode now. But we paid a ransom before their release but we don’t want to state the amount. We paid ransom but all the same, we want to thank the police as well.”

A parent who spoke on condition of anonymity after the press briefing said the police merely gave the students and staff a lift after the kidnappers had set them free. He said the police picked them up and dropped them near the Kaduna toll gate, about five kilometres from the city centre.

“We thank them for giving the children and the two staff a ride,” he said. “What happened was that when the children and the two staff were released, they had no shoes or footwear. So, out of the ransom paid, the kidnappers gave the victims transport money to come back to the town. It was out of that money that the principal crossed over to the other side of the road to buy slippers for the victims. It was at that point that police arrived and offered to give the victims a ride. Even the first time they paid part of the ransom, the kidnappers also gave the ransom bearer transport fare back to town.”

He also told reporters that the kidnappers had tortured the girls and teachers. “They were torturing them each time they called us so that we could hear them,” he explained, adding: “They said they were being fed rice mixed with palm oil while in captivity.”

The kidnappers were said to have contacted the school management and initially demanded various much larger sums, gradually reducing the demand from N30m per head to N10m per head to a total of N50m for all eight victims. On Friday 25 October, however, after days of negotiations, the kidnappers finally agreed to collect N10m in addition to the earlier ransom payment of N3.6m.

The source explained, “We took the additional N10m to them and they have released the children and workers. As soon as we paid the N10m yesterday [Friday], they started moving out but they couldn’t arrive home because it was late. They had to sleep at one point. They continued their journey this morning and arrived safely.”

Kidnappings for ransom are a huge income source for Nigeria’s terrorist groups, the Fulani (operating mainly in the Middle Belt) and Boko Haram (mainly in the northeast). Armed gangs have abducted hundreds of people in Kaduna state this year and some parents have withdrawn their children from Engravers’ College because of insecurity in the area.