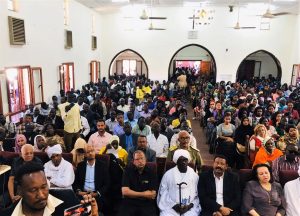 On Christmas Day, Sudan’s new Minister of Religious Affairs and Endowments, Nasr al-Din Mufreh, and other senior government officials attended a service at Khartoum Bahri Evangelical Church (pictured). The church had been persecuted for years under the Islamist government of former President Omar al-Bashir, who was ousted by the army in April 2019 after widespread protests that began in December 2018.

Khartoum Bahri Evangelical Church is part of the Sudan Presbyterian Evangelical Church. In recent years, the authorities arrested members on false charges and threatened to seize church property, while the government appointed a committee to assume control of the denomination.

The officials’ attendance at the Christmas Day service followed the government’s announcement of Christmas as a public holiday for the first time since the suspension of the holiday following the secession of South Sudan in 2011, when President Bashir began his programme of intensive Islamisation of Sudan. 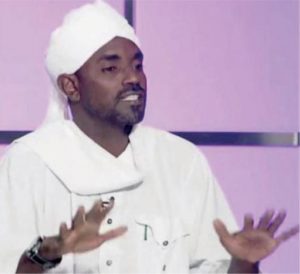 At a press conference after he visited a number of churches in Khartoum on Christmas Day, Minister Mufreh (pictured) acknowledged that Christians had faced persecution during the previous regime, stating: “I tender my apology for the oppression and the harm inflicted on you physically, by destruction of your temples, the theft of your property and the unjust arrest and prosecution your servants and confiscation of church buildings.”

In an email interview with London-based international Arabic newspaper Asharq Al-Awsat, Minister Mufreh admitted the presence of many Islamic extremists in Sudan, although he denied the existence of an Islamic State entity. “We are not aware of the presence of ISIS at the moment,” he said, “But there are some religious sermons in which extremism is emerging.”

He said his ministry would work to combat extremism. “The Sudanese Islamic Movement project has been defeated in political and community life thanks to the glorious revolution,” he said, but noted that Islamist cadres were using a number of mosques to promote their ideas. “We will besiege these mosques with a serious discourse calling for moderation and the fight against extremism,” he added.

Minister Mufreh said that property stolen from Christians would be returned through the Judiciary and concluded by stating that Christians and all people of other faiths and religions are free to practice their rituals.

Advances in religious freedom since the ousting of President Bashir led the US State Department to announce on 20 December that Sudan had been removed from its list of Countries of Particular Concern that engage or tolerate “systematic, ongoing and egregious violations of religious freedom” and had been upgraded to a watch list. Sudan had been designated a Country of Particular Concern since 1999.

Civil war in Sudan from 1983 to 2005 led to the secession of South Sudan in July 2011, following which President Bashir vowed to adopt strict Sharia and recognise only Islamic culture and the Arabic language. Harassment, arrests and persecution of Christians intensified, and the authorities expelled foreign Christians and demolished or confiscated church buildings on the pretext that they belonged to South Sudanese Christians, whom they threatened to kill if they did not leave or cooperate with efforts to find other Christians.

In April 2013, the then-Minister of Guidance and Endowments announced that no new licenses would be granted for church buildings in Sudan, claiming that a decrease in the South Sudanese population would make them unnecessary.

President Bashir was deposed on 11 April 2019 following mass protests calling for freedom, justice and peace, and a transitional military council was formed to rule the country. Further demonstrations led the military to accept a civilian presence in the transitional government, and protestors and military signed a power-sharing agreement in August 2019.

The new transitional government, led by Prime Minister Abdalla Hamdok, an economist, was sworn in on 8 September. It is tasked with implementing comprehensive reforms during its 39-month period, which will be followed by the election of a civilian government.

In September, Pastor Mobarak Hamad, former head of the Sudanese Church Council, demanded that the transitional government return all church buildings, lands and properties confiscated by the former regime.

On 14 December, Omar al-Bashir was sentenced to two years in a correctional facility for corruption and illegitimate possession of foreign currency. He still faces charges of plotting the 1989 coup that brought him to power and has not yet been charged in relation to the crackdown in which more than 250 protestors were killed in 2019. The International Criminal Court has indicted him with directing a campaign of mass killing, rape, and pillage against civilians in Darfur.

Read more about the persecution of Christians in the Sudan Country Profile.