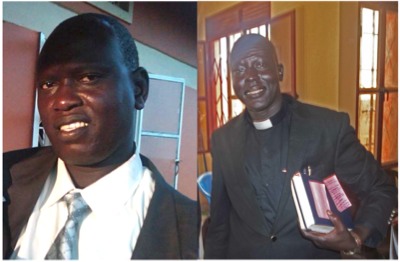 The defence team in the trial of two South Sudanese pastors closed its case at a hearing in Khartoum on 14 July, after presenting two witnesses who showed that the charges are without basis.

The two witnesses at the hearing were a retired army general and an IT expert, and they showed that the security and espionage charges against Pastor Yat Michael (49) and Peter Yein Reith (36) are without basis. Pastor Yat Michael was arrested after preaching at the Presbyterian Evangelical Church in Khartoum North (also known as Bahri) in December 2014, while he was visiting from South Sudan. Pastor Peter Yein Reith was also visiting Khartoum when he was arrested in January, when he went to enquire about Pastor Yat Michael. They are both ministers in the South Sudan Presbyterian Evangelical Church.

Two of the crimes with which the pastors have been charged (undermining the constitutional system and espionage) carry the death penalty or life imprisonment, and relate to documents allegedly found on a computer they used. The documents include internal church reports, maps showing the population and topography of Khartoum, Christian literature, and a study guide on the National Intelligence and Security Services (NISS).

At the hearing, Brigadier Abdul Aziz Khalid, a 2010 presidential candidate, testified that the documents presented by the prosecution as evidence against the pastors were in the public domain and not classified; therefore the security and espionage charges were without basis. He said that the documents are not related to military or other state secrets as had been alleged, and stated that all the maps and coordinate data have nothing to do with the military or intelligence, are publicly available on the Internet and relate to civilian sites, not military ones. He said that the prestige of the state is not undermined by the maps, which purportedly show the dissection of Sudan into several states, and pointed out that they are published in daily newspapers.

Observers from a number of foreign embassies were present at the hearing. An official from the Sudanese Ministry of Justice told one of the pastors’ lawyers that the extent of outside interest has led the Government to take a very close interest in the case.

The pastors told the judge at an earlier hearing that they had never seen the NISS guide allegedly found on the computer before it was presented in court and that they had no knowledge of how it got onto the computer. The IT expert testified as to how easy it would have been for others to plant the document on their computers without their knowledge. Some observers have suggested that it was placed on the computer by the Sudanese authorities in order to lay the charge of espionage, which carries the death penalty.

The pastors have been charged with at least six crimes including undermining the constitutional system (Article 50); espionage (Article 53); promoting hatred amongst sects (Article 64); breach of public peace (Article 69); and offences relating to insulting religious beliefs (Article 125).

The next hearing is scheduled for 23 July, when the judge will hear closing statements, and the verdict is expected to be announced during a hearing on 5 August.

A case is pending against the lawyer representing the pastors, Mohaned Mustafa, and Pastor Hafez of the Presbyterian Evangelical Church in Khartoum North, but it is still not known when the case will be brought to court. They were arrested at the church building when they challenged a government employee overseeing demolition work, and briefly detained.

Objection
Prosecutors raised objections over Brigadier Abdul Aziz Khalid being allowed to take the witness stand, arguing that he is an opposition figure who is hostile to the NISS, which brought the case against the two defendants.

However, defence lawyer Mohaned Mustafa said that the witness was present in his capacity as a military and security expert and was testifying under oath. Presiding Judge Ahmed Gabosh dismissed the objections and the court accepted the testimony, pending subsequent analysis of the weight it should be afforded, noting that this is a criminal case governed by law and has nothing to do with the government or the opposition.

Denial of rights
The pastors were denied access to their legal team ahead of the hearing: despite repeated requests to the court and prison service, the pastor’s legal team and their families have not been given permission to visit them in Kober Prison.

Mervyn Thomas, Chief Executive of Christian Solidarity Worldwide, commented: “The ongoing denial of access to the pastors’ legal team is unacceptable and in violation of fair trial principles, as articulated in Article 14 of the International Covenant on Civil and Political Rights, to which Sudan is a party.”

Mohaned Mustafa and Pastor Hafez
The lawyer representing the pastors, Mohaned Mustafa (who represented Meriam Ibrahim last year) and the church minister Pastor Hafez were arrested on 1 July at the Presbyterian Evangelical Church in Khartoum North, where Pastor Yat Michael had been arrested in December.

The Sudanase government has long wanted to demolish the church building, and the two men were arrested when they challenged a government employee overseeing the demolition of part of a building on the church property. The employee was attempting to destroy a part of the complex that was not within the government order.

The lawyer was driven to the police station but the pastor was made to walk there in handcuffs to humiliate him. During his detention, Pastor Hafez was hit on the side of his head with a gun, and had to go to hospital for x-rays after his release. Both men were released on bail and face charges of “obstructing a public servant from performing the duties of his office”.

Timeline
21 December 2014 Pastor Yat Michael arrested after preaching at the Khartoum North congregation of the Sudan Presbyterian Evangelical Church.
11 January 2015 Pastor Peter Yein arrested after delivering a letter to the Religious Affairs Office in Khartoum, enquiring about the whereabouts of Pastor Yat Michael.
28 April 2015 Pastors began hunger strike in protest at their imprisonment.
19 May 2015 Pastors appeared in court to face six charges (two of which carry the death penalty).
4 June 2015 Pastors transferred from a low-security prison in Omdurman to the high-security Kober Prison in Khartoum North, where they were put in separate cells.
15, 18 & 25 June and 2 July 2015 Court hearings held, but no new evidence advanced. At the end of the hearing on 2 July, the judge ordered that the case should proceed.