The vast majority of the 148 people killed by Al-Shabaab terrorists at Garissa University on Thursday 2 April were Christian students.

When the gunmen arrived, their first target was an early morning Christian prayer meeting. Of 29 students there, just seven survived. “We were praying,” said Duncan Obwamu (25). “We were in a circle in the room holding hands.” First, the barrel of a gun appeared at the door. The first to die was the young woman leading in prayer. An Al-Shabaab gunman stepped into the room and continued firing.

“He didn’t say anything, but you could see from the look on his face he was very happy,” Duncan said. Hit in the arm and shoulder and covered in the blood of other students, he lay still as the gunman kicked the bodies to be sure they were dead. “I heard him laugh as he communicated with the others outside”, he said.

Kenneth Luzakula was standing at the back of the prayer meeting. He said: “They killed all my friends. I was praying with them when we heard gun shots and two guys who wore hoods and carried long guns came in. I escaped because I was standing next to the rear door, so I dashed out with one other friend. I could hear my friends still praying loudly and calling the name of Jesus Christ.”

Focus Kenya (the Christian student organisation affiliated to IFES) stated: “We can confirm that the Christian Union members in a prayer meeting in Garissa university college were among the first targets of the terrorist attack. It appears most of them died. They have gone to be with the Master whom they loved and served. We pray for strength for the relatives as they seek to identify bodies, and rest them in peace. Shalom.” Focus Kenya has organised a Memorial Service to be held on Thursday 9 April.

The gunmen then stormed the halls of residence, taking some 700 students hostage before separating the Christians from the Muslims and executing the Christians as they went. Some were killed when they were unable to recite the Islamic creed (the Shahada), others when they responded with prayers to Jesus.

When the terrorists went to the women’s hostel, they tricked them into complying with their orders, saying that their religion did not allow the killing of women. They shouted outside the womens’ hostel: “If you don’t want to die, come outside. According to our religion, we do not kill girls. Walk down the stairs to the ground level, or alternatively call your fathers to come and save you.” The female students walked to the ground floor of the building only for the terrorists to spray them indiscriminately with bullets.

“We have come to kill and to be killed… we don’t fear death, this will be a good Easter holiday for us,” screamed the terrorists as they continued their killing spree.
Many students were forced to make calls to their parents by the gunmen, who wanted to pass on the message that they were killing their children as retaliation for Kenya’s military intervention in Somalia. They also answered frantic calls from relatives to the students during the siege, telling them that they were shooting their children.

“When our relatives started calling after learning about the siege, the terrorists picked up the calls and told the relatives, ‚ÄòWe are killing them now. You should know Garissa is for Muslims only’.” 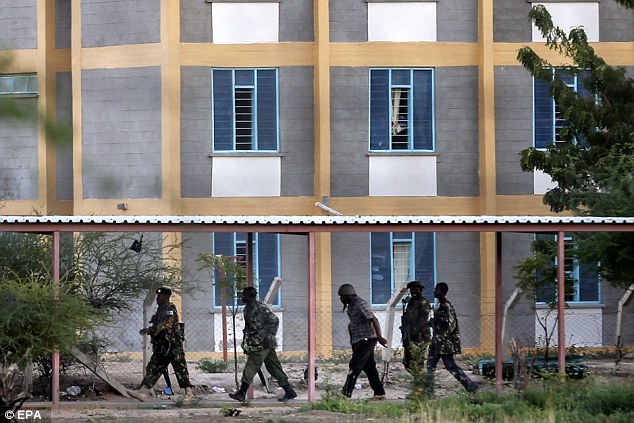 Garissa University College was built in 2011 and took its first full-year student intake in 2013. Many people were surprised that the government would build a university in a region of such extreme insecurity. Whilst the population of Kenya is 82 percent Christian, Garissa is in the North Eastern Province which borders Somalia and its population is close to 90 percent Muslim – largely ethnic Somali – and can be a hostile place for Christians. Despite the threat, the college had only two security guards on duty at any time – one of whom who turned out to be an Al-Shabaab sympathiser who helped facilitate the attack. Four of the five gunmen were also ethnic Somali Kenyan nationals; one had been a promising law graduate and was the son of a government official.

Ireland’s Minister for Foreign Affairs, Charlie Flanagan quickly condemned the massacre, stating: “I strongly condemn the terrorist attack that took place today in a University College in Garissa and led to the death and injury of so many innocent Kenyan students. On behalf of the Irish people I send my condolences to the families and loved ones of those who died, to fellow students, to the Kenyan government and people.”

The massacre was also condemned strongly by Sheikh Muhammad Umar Al-Qadri (pictured), Imam of the Al-Mustafa Islamic Centre in Blanchardstown, Dublin. At Friday prayers in the mosque, he led his congregation in two minutes’ silence in memory of the victims of the massacre. He dedicated the first part of his sermon to the similarities between Islam and Christianity, and the second part to condemn the persecution of Christians.

Al-Shabaab, which has links with Al-Qaeda, is the main Islamist organisation operating in Somalia. The name “Al-Shabaab” means “The Youth” in Arabic. The group is estimated to have between 7,000 and 9,000 fighters and is recognised as a terrorist organisation by many Western countries. Al-Shabaab rules according to a strict interpretation of Islamic laws known as Wahhabism (the same form of Islamic rule imposed in Saudi Arabia and Afghanistan). This form of Islam is so extreme that even Sufi Muslims have been driven underground. All its laws come from Sharia law and punishments include flogging, hand amputation and execution by stoning. It has radicalised many communities and it aims to eradicate Christianity from Somalia. Since seizing control of central and southern Somalia in 2008, Al-Shabaab has murdered dozens of Christians, targeting converts from Islam.

Recently, Al-Shabaab has spread to northeast Kenya. Kenyan troops entered Somalia in 2011 in pursuit of Al-Shabaab, which the Kenyan government accused of kidnappings and murders in Kenya. Al-Shabaab leaders warned of reprisals. Many members of Al-Shabaab who have been driven out of Somalia have taken refuge in northeast Kenya where they have carried out many attacks, including the attack on Westgate Shopping Mall in Nairobi in 2013.