The Christian community in Niger is in shock after a weekend of violent protests led to the death of ten people and the destruction of scores of church buildings and Christian homes.

Anti-Christian rioting erupted in Niger’s second largest city, Zinder, on Friday 16 January and spread quickly to the capital, Niamey, as Islamists expressed their rage over the depiction of Mohammed on the cover of French satirical magazine Charlie Hebdo. Associating Christians with the publication, the rioters attacked over 70 church buildings, despite the fact that Charlie Hebdo is not a Christian magazine, and routinely offends Christians too.

The protest started in Zinder, in the southeast, on Friday 16 January and quickly spread to surrounding areas and to Niamey. Police said that 45 churches had been burned down in the two days of violence, but information gathered by World Watch Monitor revealed that more than 70 churches had been destroyed, along with numerous Christian schools and other buildings, including the Good Samaritan Orphanage run by the Assembly of God Church. The 40 children from the orphanage are under the care of police.

It is thought that over 30 Christian homes were looted and burnt down, and many Christians lost everything they owned. Pastor Zakaria Jadi, whose church building was destroyed, told the BBC that he was meeting with the elders when he heard about the attacks: “I just rushed and told my colleagues in the church to take their families away from the place. I took my family out from the place… When I came back, I just discovered that everything has gone. There’s nothing in my house and also nothing in the church.“

A former French colony, Niger is 97% Muslim, and has only about 50,000 Christians. It is constitutionally secular and has been known for peaceful coexistence between the Muslim majority and the tiny Christian minority, although tension has increased in recent years due to the rise of Islamist groups and the violence in neighbouring Nigeria. 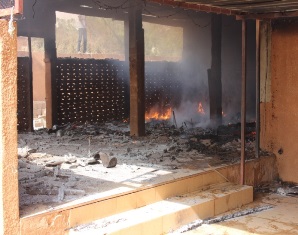 The images show three churches in Niamey that were damaged on 17 January: an unnamed Baptist church; Bethel Church; and Celpa Church.

Protests spread
In Zinder, eight churches and twelve Christian homes were set on fire, and two Christian schools were attacked and ransacked. About 300 Christians took refuge in police stations, army barracks and the homes of Muslim friends. Some have been able to return to their homes. The bodies of at least five Christians were later found in burnt-out churches.

Protests quickly spread to other towns in the Zinder region. “In Gourá the town’s only church is on fire,” a witness reported. All Christian homes were burned and all the Christians were taken into the military barracks for protection.

In Tanout, the protesters burned down two churches, while in Magaria they destroyed one church. In Maradi, another of Niger’s main towns, close to the Nigeria border, two churches were burned down, while 200 km away a small Fulani church in Bermo village was attacked and burned down. Local sources said the prompt reaction of the security forces helped to limit the destruction.

In Birnin Gaourá, about 100 km from Niamey, three churches were set on fire and a missionary school was attacked. In Agadez, in the north, there was an unsuccessful attempt on the church.

The violence spread to Niamey, as a large crowd of about 1,000 angry Muslims gathered outside the main mosque before marching across the city and setting several public buildings and properties on fire. Security forces fired tear gas in an attempt to restore order, but the rioters were out of control, and small groups went on to attack Christians across the capital.

On Sunday 18 January the situation in Niamey was calmer, but the bells of the Catholic Cathedral remained silent, though troops had protected it from the violence of the previous day. Most Christians did not feel safe to return home. 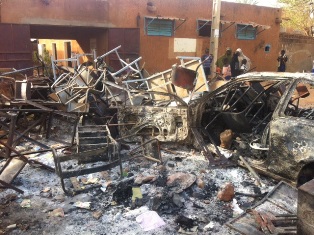 Reaction
President Mahamadou Issoufou declared three days of mourning for the victims, and in a television address on 17 January he condemned the violence and expressed surprise: “What have the Christians of Niger done to deserve this? Where have they wronged you? Those who plunder those places of worship, those who desecrate them, those who persecute and kill their Christian compatriots, or foreigners living on the soil of our country, did not understand anything about Islam.” Several Muslim clerics also condemned the violence.

Local pastor Sani Nomao, in an interview on the BBC Hausa Service, called on Christians in Niger to respond with the love of Christ: “I call on every single believer in Niger to forgive and forget, to love Muslims with all their heart, to keep up the faith, to love Christ like never before. Although it is painful, and what we are experiencing is really difficult, we are God’s children. We must love our persecutors… Let no one seek revenge.”

Various sources reported a lack of reaction from the security forces, leaving Christians and their properties easy targets for protesters and looters.

Elsewhere in Africa
Muslims in several other African countries protested against the Charlie Hebdo publication. In Khartoum, capital of Sudan, after Friday prayers police prevented hundreds of protesters from reaching the French Embassy and the French Cultural Centre to submit a memo to the French Ambassador.

In the Somali capital, Mogadishu, students marched on Saturday 17 January holding signs that declared, “Je suis Muslim – and I love my Prophet“.

In Algeria, a peaceful protest march ended in a riot, with police firing riot pellets at small groups of protesters who threw rocks and bottles. Several police were injured.

In Kenya, the issue of press regulation and control has been brought into the spotlight. The Bloomberg news agency reported that the Media Council of Kenya threatened to close a Nairobi newspaper for publishing offensive materials after it reprinted the cover of Charlie Hebdo, prompting complaints by Muslim readers. The Star ran an apology and pledged to be more sensitive toward “Muslim sensibilities”.