Sri Lanka, known as Ceylon until 1972, is an island in the Indian Ocean that gained independence from Britain in 1948. It suffered over 25 years of civil war (1983-2009) between the mainly Buddhist Sinhalese majority and the mainly Hindu minority Tamils, which ended when the government crushed the Tamil Tiger separatists. The country has also experienced serious natural disasters such as the 2004 tsunami.

Sri Lanka is officially a secular state, but Buddhism is recognised as the state religion – the Constitution states: “The Republic of Sri Lanka shall give to Buddhism the foremost place and accordingly it shall be the duty of the State to protect and foster the Buddha Sasana [teachings of the Buddha]” – and radical Buddhist movements are stirring up ethnic, political and religious tensions. Christians displaced by natural disasters are often afraid to seek shelter in relief camps due to fear of Buddhist hostility.

The Constitution guarantees freedom for other religions, but in practice followers of minority religions face discrimination. Hindus comprise about 12% of the population, Muslims 9% and Christians 8%.

Christianity, introduced by the Portuguese in the 16th century, is still considered a foreign religion and converts are seen as traitors and face threats and attacks. Muslims also face persecution.

Traditional churches are generally tolerated, but since the 1980s the growth of evangelical Christianity has led to persecution including church burning and attacks on individuals. Many pastors have been beaten, threatened and arrested. A government circular introduced in 2008 requires places of worship to be registered, although there is no legal basis for registration. The directive is used not only on new buildings but on places where Christians have met for many years, and many “unregistered” churches have been closed.

Bodu Bala Sena (BBS) or “Buddhist Power Force” is believed to be behind most attacks on minorities. A Sinhalese Buddhist nationalist organisation, it formed in Colombo in July 2012 when Buddhist monks broke away from the Jathika Hela Urumaya (National Heritage) party, saying it was not sufficiently militant in protecting Buddhism.

Persecution of Christians has escalated since 2012, including mob attacks on churches, state-sanctioned church closures, personal attacks, arson, vandalism, intimidation and discrimination (notably in relation to Christian burials being prevented).

Christians in Sri Lanka hoped to see a change for the better when President Maithripala Sirisena took office in January 2015, as he was more tolerant of minorities than his predecessor, but incidents of persecution continued, along with a surge in violent attacks on Muslims. The image shows a church building destroyed by a Buddhist mob in January 2017.

President Sirisena has been succeeded by Buddhist hardliner Gotabaya Rajapaksa, who won the presidential election in November 2019 and a landslide victory in the general election in August 2020. Previously, as defence secretary, he was instrumental in introducing restrictions on churches, but some Christian leaders support his presidency because of his strong stance against Islamist violence. 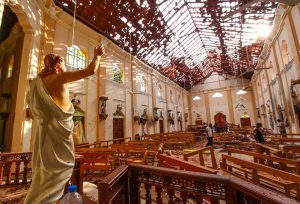 All the hotels and one of the churches (St Anthony’s Shrine) are located in the capital, Colombo, while the church that suffered the deadliest attack, with over one hundred worshippers killed, is St Sebastian’s Catholic Church in Negombo (a majority-Catholic town north of Colombo) and the third church to be targeted, Zion Evangelical Church, is located in the east-coast town of Batticaloa.

The Sri Lankan government blamed a local Islamic extremist group, the National Thowheed Jamaath (which roughly translates as the National Monotheism Organisation) but officials said the small group could not have carried out the coordinated attacks without international accomplices. On 23 April, Islamic State claimed responsibility.

On Easter Sunday, three churches were attacked simultaneously by suicide bombers at around 8.45 am, when they were crowded with Christians celebrating Easter. 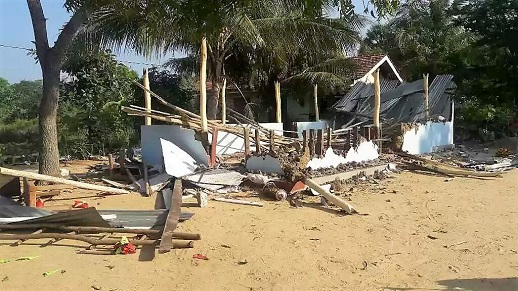 On 5 January a mob led by a Buddhist monk destroyed a church building in northwest Sri Lanka.

Fresh attempts are being made to introduce an anti-conversion bill in Sri Lanka. The last bill was judged unconstitutional by the Supreme Court in December 2004 – just before the Asian tsunami devastated the coastal regions.

The new bill is at the committee stage where Godfrey Yogarajah (pictured) has led submissions from the National Christian Evangelical Alliance of Sri Lanka (NCEASL) opposing the bill.