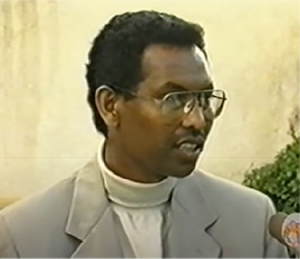 Rev Dr Futsum Gebrenegus is an Eritrean Orthodox priest and psychiatrist who was arrested in November 2004 because of his involvement in the Medhane Alem Bible study group, a renewal movement within the Eritrean Orthodox Church. He has remained in prison, incommunicado, ever since.

Dr Gebrenegus was Eritrea’s only psychiatrist and appeared regularly on Eritrean TV as he held positions on many government-appointed commissions. Until his arrest, he was the most senior doctor at St Mary Psychiatric Hospital in Asmara.

Dr Gebrenegus served as a deacon in the Eritrean Orthodox Church from childhood. He was then ordained priest and became one of the organisers of the Medhane Alem (“Saviour of the World”) movement, along with Rev Dr Tekleab Menghisteab and Rev Gebremedhin Gebregiorsis. On 19 November 2004, Dr Tekleab and Dr Gebrenegus went to a conference organised by the Ministry of Health at which they were both scheduled to make presentations on their research. Security forces arrested both as they entered the conference venue, and Rev Gebremedhin was  arrested the same day.

Following the arrest of the three Christians, the government closed down the Medhane Alem church in which they had grown up and served all their lives, and the congregation was forced to disperse.