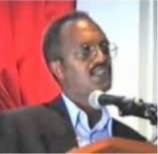 Rev Dr Tekleab Menghisteab (57) is an Eritrean Orthodox priest and physician who was arrested in November 2004 because of his involvement in the Medhane Alem Bible study group, a renewal movement within the Eritrean Orthodox Church. He has remained in prison, incommunicado, ever since.

LATEST NEWS (JANUARY 2021) While there can be no contact with Dr Tekleab, it is believed that he is receiving regular insulin to manage his diabetes.

Tekleab was born into a family of ten siblings in the Eritrean capital, Asmara, and in his early teens he joined the youth programmes at Mekane Hiwet Medhane Alem Orthodox Church and became devoted to God and the Bible, which he spent his spare time studying and teaching to other young people. He spent seven years studying medicine in Jima, Ethiopia, and returned to Eritrea to serve his people through his profession and through service to his local church, where he ministered as a deacon for several years and was then ordained priest.

Dr Tekleab was one of the organisers of the Medhane Alem (“Saviour of the World”) movement, along with Rev Dr Futsum Gebrenegus and Rev Gebremedhin Gebregiorsis. On 19 November 2004, Dr Tekleab and Dr Gebrenegus went to a conference organised by the Ministry of Health, at which they were both scheduled to make presentations on their research. Security forces arrested both as they entered the conference venue, and Rev Gebremedhin was  arrested the same day. Dr Tekleab’s family members did not know where he was until the next morning, when they received a call from a detention centre asking them to bring in his diabetes medication.

Following the arrest of the three Christians, the government closed down the Medhane Alem church in which they had grown up and served all their lives, and the congregation was forced to disperse.

As well as being a highly respected physician, Dr Tekleab was well known for his five hundred-page commentary on the New Testament, published in 1999 – the first ever in the Tigrinya language. In 2002, he published a defence of the church’s teaching.

In February 2005, it was rumoured that Dr Tekleab, an insulin-dependent diabetic, was suffering from hypertension. Later reports emerged that he collapsed on at least one occasion and was taken to hospital after he was unable to obtain his medication.

The Eritrean gospel singer Helen Berhane, who was imprisoned in 2004 and held for 32 months in brutal conditions in shipping containers, had been encouraged in her faith through the ministry of Dr Tekleab. On one occasion, Helen was taken to a hospital where she was heartbroken to see her friend being abused.

Dr Tekleab’s wife Wubie Kahsay and their daughters Hana (22), Sesayit (20), and Rediet (17) have left Eritrea for security. They have not seen or spoken to him since he was imprisoned.

(Human Rights Without Frontiers, Immigration and Refugee Board of Canada, In Chains for Christ, Release Eritrea, Release International)