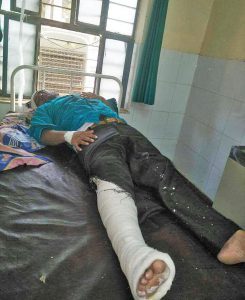 India’s anti-conversion laws have led to increased violence against Christians in the ten states where they are in force, all led by Narendra Modi’s Hindu nationalist Bharatiya Janata Party.

Officially called “Freedom of Religion” laws, they are intended to stop Hindus being converted to other religions. The laws forbid conversion by “force, fraud or allurement” and state that those who wish to convert must first gain official permission and that religious leaders must report conversions or risk imprisonment.

Extremists use the laws as a licence to attack Christians, claiming they are forcing Hindus to convert. Typically, attackers burst into church services, beat the Christians and have them arrested on false charges of forcibly converting Hindus. The attackers generally act with impunity and police rarely arrest them. The laws are not applied to Hindus and many people who have left Hinduism are coerced to convert back in “Ghar wapsi” (“homecoming”) ceremonies.

Another motivation behind the introduction of anti-conversion laws is the desire to counter “Love Jihad”. This is an emotive term used by radical Hindu groups to stoke sectarian fear by accusing Muslim men of luring Hindu women into marriage in order to force their conversion to Islam, and is the driver of laws criminalising conversion solely for the purpose of marriage.

Anti-conversion laws have been passed in thirteen states, but in three states they are not active. They have been passed in Arunachal Pradesh (although its government has not framed the rules needed to enforce the laws), Chhattisgarh, Gujarat, Haryana, Himachal Pradesh (parts were repealed after a court challenge brought by the Evangelical Fellowship of India, but in August 2019 the Bharatiya Janata Party-led government passed a new bill adding to the laws and introducing longer prison sentences), Jharkhand, Karnataka, Madhya Pradesh, Odisha, Rajasthan (passed but never signed by the state’s governor), Tamil Nadu (passed in 2002 and repealed in 2004), Uttarakhand and Uttar Pradesh.

In 2020 and 2021, several states introduced new or harsher anti-conversion laws, which have been used by Hindu militants to justify attacks on Christians. Indian Christians fear that under Hindu nationalist pressure the laws will be enacted at national level. Since 2015, ministers of the ruling Bharatiya Janata Party government have called for the adoption of a nationwide anti-conversion law, but the Ministry of Law and Justice has advised against the move, saying the constitution stipulates that passing laws on such matters rests with individual states. Critics of the call for a nationwide anti-conversion law see it as an attack on the secular values of India’s constitution.

No Christian has been convicted under the laws, but the frequency with which cases are registered (and the associated violence) causes fear among Christians and undermines their religious freedom, which is guaranteed under the Indian constitution and international covenants to which India is a signatory.

The image shows Punjab pastor Harjot Singh Sethi, who suffered serious head injuries and a broken leg when a mob of Hindu extremists attacked a house church he was visiting in Rajasthan state. The mob took him to a police station and accused him of “forceful conversion”. Pastor Sethi has since recovered.