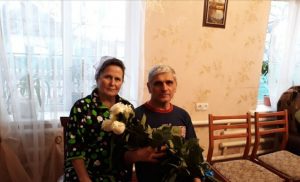 On 23 September, Leonid Petrovich Ponomarev (pastor of Kurchatov Evangelical church in Mariupol) and his wife Tatyana Nikolaevna Ponomarevs were taken away from their home by men in military uniform and masks.

The men arrived at their home two and a half hours earlier and ordered neighbours who tried to find out what was happening to return to their homes and stay inside. They reported they could hear groans and cries until the military drove away with the couple. There are growing concerns for Leonid and Tatyana as all attempts by family and church members to find out where they are being held have been unsuccessful. It is thought that Leonid may have been charged with “participating in extremist activities”. Authorities issued a warrant to search the church building for extremist literature.

Mariupol is located in Donetsk Oblast and is controlled by the Russian-backed separatist Donetsk People’s Republic. Russian forces besieged the city at the beginning of March and eventually gained full control in May. Ukrainian officials reported that about 22,000 civilians had been killed during the siege and at least 95% of the city had been destroyed during the fighting, largely by Russian bombardments. 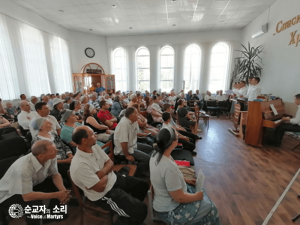 The Kurchatov church building (known as a prayer house) remained intact during the siege and the church continued to meet there until one Sunday in September when military officials asked the church to open their prayer house for use in organising a referendum on the region becoming part of Russia. Church members refused and authorities came during the week and sealed up the prayer house. Church members re-opened the prayer house the following Sunday for their regular meeting, but army officers interrupted the service and took away Pastor Leonid Ponomarev who was leading. The pastor was initially released and allowed to return home.

The church building has now been confiscated by the Russian authorities. 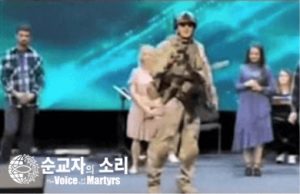 On Sunday 11 September, armed men entered the sanctuary of Grace Church in Melitopol and halted the service while the congregation was singing a hymn. They registered the names of all those present and detained several people. Church pastor  Mikhail Britsyn was ordered to leave the city within 48 hours. The worship service was being broadcast live (see screenshot), so online viewers witnessed the events. The video of the worship service has since been taken down by the authorities who have closed the city’s three largest evangelical churches in recent months.

The city of Melitopol is in Zaporizhzhia Oblast in southern Ukraine. Russian forces attacked the city on 25 February and captured it on 1 March after heavy fighting. Citizens have since held street protests against the military occupation. Zaporizhzhia is one of four regions which Russia annexed in late September following hastily-organised referendums. 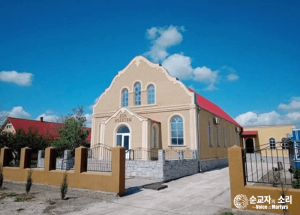 On 21 September, Russian forces interrupted a midweek service being held in a n evangelical church (pictured) the village of Chkalovo near Melitopol,  stated that the gathering was forbidden and said, “Your feet will not be here after the referendum. We have only one faith: Orthodoxy.” The church had been holding worship services every day since the war began.

Dr Hyun-Sook Foley of Voice of the Martyrs Korea, which reported the news, says that though the church buildings have been seized and church leaders detained, the congregations continue to operate. “Ukraine has a tradition of underground church, extending back to Soviet times,” says Dr Foley. “The present situation cannot stop the work of Christ. The churches there are continuing to faithfully witness for Christ. They do not rely on pastors or buildings but on the Lord Jesus alone.”

(Voice of the Martyrs Korea) 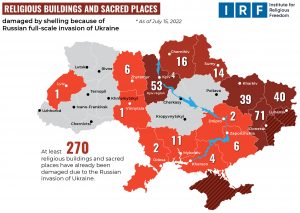 A new report published by The Institute for Religious Freedom (a Ukrainian human rights NGO) covering the period from the beginning of the Russian invasion of Ukraine in February to mid-July documents that at least 270 religious buildings, spiritual educational institutions and sacred sites such as cemeteries and memorials were destroyed or damaged by shelling. The report states that 108 Ukrainian Orthodox church buildings were affected as well as 43 Baptist church buildings and 42 Pentecostal church buildings.

The largest number of buildings destroyed was in Donetsk region (71), especially in the city of Mariupol followed by Kyiv region (53). Large-scale destruction and damage was also caused to churches and houses of worship in Luhansk (40) and Kharkiv (39) regions.