The majority of Syria’s Muslim population is Sunni, but President Assad and his supporters are Alawites, members of a Shi’ite sect that makes up only 12% of Syria’s population. Alawites are influential in the army and government.

The civil war that began on 15 March 2011 caused at least 470,000 deaths and displaced an estimated 13 million people. Over 5.5 million Syrian refugees registered in neighbouring countries, many of them in Turkey, Lebanon and Jordan, and many others remain internally displaced in camps. Over a million Christians fled the country or were internally displaced and many others were raped, tortured, kidnapped for ransom and killed.

The civil war grew out of the 2011 Arab Spring protest movement. Syrians began to protest against President Bashar al-Assad’s Baath Party government and to demand the release of political prisoners, and in March 2011 troops were ordered to fire on protestors. The ensuing unrest led to the development of an armed opposition that grew into a coalition of rebels trying to overthrow the government, including foreign Muslim extremists who flooded into Syria to join the fight. By December 2015, Islamic State terrorists held an area extending from eastern Syria to western Iraq.

The Syrian Democratic Forces declared territorial defeat of Islamic State on 23 March 2019 after retaking its territory, but the caliphate leaves a legacy of instability, ruined infrastructure, food shortages and lack of employment, with 83 percent of the population living below the poverty line. Pockets of IS fighters remain a threat, and the situation remains particularly unstable in northern Syria, which was invaded by Turkish troops in October 2019.

The Syrian church dates back to New Testament times. Before the civil war, Syria was one of the safest places in the Arab world to be a Christian and while there was some discrimination (for instance in connection with housing and employment) and some emigration, Syrian Christians enjoyed relative freedom and stability, were prosperous, had good relations with Muslims and were respected in society. They were allowed to worship and practise their faith without much official interference and although meetings were monitored Christian literature was freely available. The Christian population was concentrated in cities, especially Damascus, and consisted mainly of Orthodox and Catholic Christians, but there was also a small Protestant church.

During the civil war, Christians were particularly affected in areas under the control of extremist Islamists who viewed them as an obstacle to a Sharia-governed country. In these areas, widespread violence included attacks on Christians, their property and church buildings. Some historic churches were demolished or turned into Islamic centres and militants kidnapped several Christian leaders for political purposes or financial gain. Some Christians who were killed in the civil war were martyred for their faith.

In August 2015, Islamic State militants captured Qaratayn in Homs Governorate, took over two hundred Christians hostage and murdered 21 of the three hundred Christians trapped in the city. Some hostages were taken to Raqqa in northern Syria, Islamic State’s de facto capital; many were ransomed by their families. The ruined city of Qaratayn was retaken by Russian-backed Syrian forces in April 2016 and Raqqa was retaken in November 2017, as Islamic State militants were pushed out of the large swathes of territory they had taken in Iraq and Syria.

With conditions in Syria so difficult and the future uncertain, refugees are hesitant to return. Many of them have ended up living in squalid and dangerous conditions, often trafficked by brutal, extortionist smugglers. Church leaders in Lebanon and Turkey have been overwhelmed by the numbers of Christian refugees looking for food and shelter, while Christians in official refugee camps face violence from extremist Muslims in the camps.

Christians in northeast Syria had to flee again in October 2019 when Turkish troops and Islamist jihadists advanced into the area. Barnabas Fund reported that the Islamists said there would be “no room for Christians” while Open Doors reported in its World Watch List 2021 that in Hasakah province in the northeast (home to tens of thousands of Assyrian and Armenian Christians) Islamic State militants, Turkish forces and opposition groups supported by Turkey were continuing to target civilians and churches.

Why were Christians targeted?

Christians were targeted by Islamist opposition factions that wanted Syria to become a Sunni Muslim state, notably Jabhat Fatah al Sham, the al-Qaeda offshoot previously known as Jabhat al-Nusra or Nusra Front. Such extremists adopted the slogan “Alawites to the tomb and Christians to Beirut”.

Christians were widely believed by the opposition to be supporters of President Assad, since they enjoyed relative freedom and security under the rule of the secular Baath party (which many Christians joined). The Baath party and other secular parties suppressed the Muslim Brotherhood and the more radical Salafists. The belief that Christians were pro-government meant they were very vulnerable in areas controlled by opposition groups. Furthermore, many radical fundamentalists come from poor rural communities and urban slums and targeted Christians because of their perceived prosperity.

Two bishops kidnapped on 22 April 2013 in the village of Kfar Dael in northwestern Syria are still missing. Aleppo’s Syriac Orthodox bishop Yohanna Ibrahim and Greek Orthodox bishop Boulos Yaziji were on a mission to negotiate the release of two priests abducted on 9 February (Michel Kayyal of the Armenian Catholic church and Mahar Mahfouz of the Greek Orthodox church) when their car was intercepted and their driver was shot dead. The identity of the kidnappers has never been established.

During the civil war period, Church in Chains supported a number of aid projects working with partner organisations including Barnabas Fund (providing aid to displaced Christians within the country), Asia Link (providing for the needs of Syrian Christian refugees in neighbouring countries) and Team Hope (supporting a Christian doctor ministering in Aleppo). 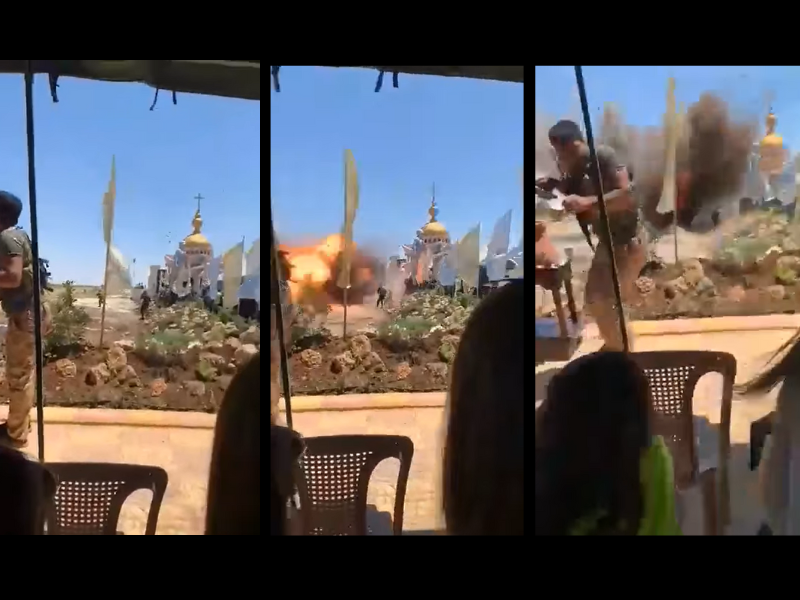