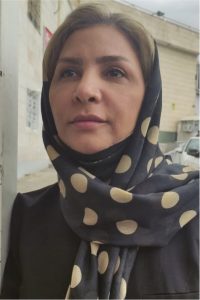 On Easter Saturday (16 April) Christian convert Fariba Dalir turned herself in to the authorities at Evin prison in Tehran to begin serving a two-year prison sentence for “acting against national security by establishing and leading an Evangelical Christian church”.

Fariba (51) was one of six converts arrested by Iranian Revolutionary Guard Corps agents in Tehran in July 2021. She and her fiancé Soroush were arrested on 19 July – Fariba at a hair salon and Soroush while driving his car – and another Christian man was arrested the same day, while the other three (a 17-year-old girl and a mother and daughter) had been arrested at their homes the previous day. Apart from Fariba and Soroush, the Christians’ names have not been made public.

Fariba spent 38 days in solitary confinement at the detention centre before being transferred to Qarchak women’s prison. She was released on bail on 18 November, and married Soroush shortly after. He and another convert were detained in solitary confinement for 38 and twenty days respectively and were transferred to Greater Tehran Prison before being released on bail in October.

The other three Christians were released after ten days in the Revolutionary Guard Corps detention centre, including the 17-year-old girl, who was held in solitary confinement and subjected to intense interrogations before being released without charge.

Fariba, Soroush and three others appeared before Judge Afshari at the 26th Branch of the Revolutionary Court in Tehran in November, and at a sentencing hearing on 4 December Fariba was sentenced to five years in prison for “acting against national security by establishing and leading an evangelical Christian church“. Her five-year sentence was based on the mistaken belief that she had a criminal record, but when the court was informed that this was a mistake her sentence was reduced to two years.

Soroush and the other three Christians were each sentenced to ten months’ imprisonment for their membership of the church, but were fined and released due to time already served.

Also on Saturday 16 April, Christian convert and house church leader Sakine Behjati (known as Mehri) began serving a two-year prison term – like Fariba Dalir, she had been charged with “acting against national security by establishing and leading an evangelical Christian house church”. Mehri handed herself in to the authorities at Evin prison but was later permitted a transfer to Lakan prison in her home city of Rasht so she could be closer to her young child.

Mehri was arrested in February 2020 with three fellow-members of the non-Trinitarian Church of Iran. The four converts – including Mehri’s nephew Hadi (Moslem) Rahimi and married couple Ramin Hassanpour and Kathrin (Saeede) Sajadpour – were officially charged in May 2020 and taken to Lakan Prison because they could not afford bail.

They were released a week later on a reduced bail and in August 2020 they were sentenced to between two and five years in prison (Ramin to five, Moslem to four and Mehri and Saeede to two). Their appeals were rejected in September 2020.

Moslem began serving his sentence in January 2022, and a month later the other three Christians were told to hand themselves in to the authorities in Tehran by the end of February. Mehri, however, was later permitted an additional six weeks at home to spend Nowruz (Iranian New Year) with her family.