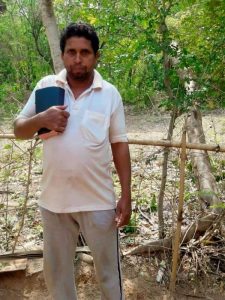 In mid-August, Christian evangelist Karthridasan Madhavan (known as Madhavan) was burnt to death in the state of West Bengal in northeast India by a mob that included his own family.

Madhavan was the only Christian in his extended family and lived in the village of Gobindapur in Jhargram district, about 175km from the state capital Kolkata. He belonged to a church in Bangura village named after the famous 18th century Baptist missionary William Carey and served under a local evangelist named Tanmoy Shaikh in Bankura district.

In early August, Madhavan travelled to his family home for the wedding of his daughter. Members of his family pressurised him to revert to Hinduism and were outraged when he refused to do so. Local sources said that his children destroyed his Bible and verbally harassed him.

Subsequently, on Sunday 14th August, Madhavan’s wife and son came to find him in the church in Bankura, beat him badly and took him home. Together with local villagers, they dragged him into the forest where they poured petrol over him and burnt him alive.

It has been reported that police refused to take any action in response to the murder, saying that the issue was a family problem and they did not want to interfere. No villagers were willing to speak about the killing, which is not surprising as hostility to Christians is common in the area.

(Christian Solidarity Worldwide and other sources)