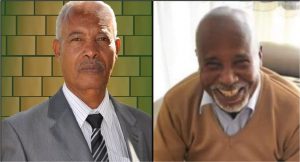 In late July, two pastors were arrested and a third was placed under house arrest in the Eritrean capital, Asmara. All are in their 70s and are from the Full Gospel Church.

Pastor Girmay Araya (75) and Pastor Samuel Okbamichael (74, right of picture) were taken from their homes in the middle of the night and brought to an unknown location. It later emerged that the two pastors were taken to the maximum-security Wengel Mermera Central Criminal Investigation interrogation centre, part of Asmara’s 2nd Police Station. Several other pastors have been imprisoned at Wengel Mermera for many years including Dr Kiflu Gebremeskel, Rev Haile Naizghe, Pastor Kidane Weldou, Mussie Ezaz and Pastor Meron Gebreselasie.

Police also intended to arrest Pastor Georgio Gebreab (72, left of picture) but they found him sick in bed and told him he was under house arrest until he is well enough to be taken into custody. Pastor Georgio has been very ill for some time. He previously served five years in a prison camp and other prisons, and was released seven years ago.

The three pastors were semi-retired and occasionally conducted funerals and weddings. It is unclear why they were targeted for arrest.

On 12 July, the UN Human Rights Council (HRC) passed a resolution extending the mandate of the Special Rapporteur on the situation of human rights in Eritrea for another year.

Special Rapporteur Mohamed Abdelsalam Babiker told the HRC in June that serious human rights issues persist in Eritrea, including the use of arbitrary and incommunicado detention and inhumane prison conditions, and noted that faith groups are still being detained without being informed of the reason for their arrest and without charge and trial.