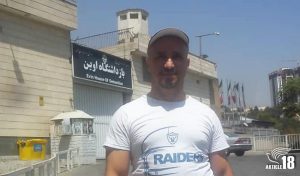 Mohammadreza Omidi (47), also known as Youhan, has been released from prison after serving two years for “acting against national security” by “organising house-churches and promoting Zionist Christianity”. A convert from Islam, Mohammadreza was originally given a ten-year sentence but it was reduced to two years at a retrial in June. He must now serve two years’ internal exile.

Mohammadreza was released from Tehran’s Evin Prison at 1.30pm on 18 August and was expected to travel home next day to his wife Maryam and teenage daughters Sara and Sandra in the northern city of Rasht.

It was initially believed that Mohammadreza’s additional sentence of two years’ internal exile in the southwestern city of Borazjan had been quashed, but before he left prison he was told to report back in 15 days to receive his paperwork and begin his exile. Borazjan is more than 1100 km south of Rasht and it is not yet known if his family will be permitted to join him in exile.

Mohammadreza is a member of the Church of Iran house church network in Rasht and was arrested in 2016 with several members of the church, including Pastor Youcef Nadarkhani.

In October 2019, Mohammadreza, Pastor Youcef and Saheb had their petitions for retrial accepted, and in June 2020 their sentences were reduced – Mohammadreza’s to two years and Youcef’s and Saheb’s to six years. Yasser, who recently tested positive for Covid-19, was not part of the retrial bid.