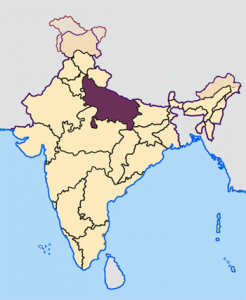 News emerged last week that police in Uttar Pradesh state had arrested and brutally beaten a pastor who was leading family devotions at his grandmother’s home. The attack occurred on 22 April, but sources told Morning Star News that threats from police officers and others in the intervening two months have kept the pastor from filing a complaint on the brutality.

Pastor Pravesh Kumar (26) of Amamahua village was visiting a sick uncle at his grandmother’s house in nearby Bhais Khur village when police arrested him after a Hindu neighbour videoed the family singing hymns during devotions on the roof. Pastor Kumar said the neighbour made the recording from the adjoining rooftop and sent it to police officers, who arrived immediately and questioned him about the purpose of the visit and the singing. He said they told him they were arresting him on suspicion of forcible conversion because hymns were part of converting people.

“They completely ignored the fact that the family we were visiting were all followers of Christ,” Pastor Kumar said. He recounted how officers took him to Bijauli police outpost at about 8 pm, tied him face forward to a tree, physically assaulted him and reviled him in coarse language. “I was beaten so brutally on my legs that they swelled up, and I was not able to walk,” he told Morning Star News. “I was limping.”

Pastor Kumar said his 55-year-old uncle arrived, noticed he was limping and pleaded with police to stop the assault, whereupon the officers demanded 20,000 to 25,000 rupees (€243 to €304) to release them. The pastor told them he had no money and had committed no crime.

Police transferred Pastor Kumar and his uncle to Bardah police station, where an officer reportedly asked about his limp and scolded the other officers for hitting him on parts of the body that bore readily visible marks.

Pastor Kumar said the officer demanded a leather strap and told junior policemen, “I will show you what body parts you should target while assaulting a person”. He said the officer lashed him thirty to forty times and beat his uncle. The officer demanded that the pastor shout slogans hailing Hindu gods and goddesses (“Jai! Sri Ram [Hail! lord Ram]” and “Jai! Durga Ki [Hail! Durga]”) and reportedly beat him for refusing.

When a junior policeman asked the officer if they should let Pastor Kumar’s uncle go he refused, allegedly saying they would fabricate a report that the pastor and his uncle had fought each other and ordering officers to beat the pastor’s uncle.

Word spread of the two Christians being beaten in custody and Christian leaders from Uttar Pradesh and Delhi called police to inquire about their arrest. Pastor Kumar told Morning Star News, “When my well-wishers and concerned Christians called the police station, the officer came and told me that he received a call and beat me all the more, accusing me of having a ‘big group’ of supporters.”

He said the officers kicked and struck him and his uncle, using batons and a leather strap, and continued to revile them with coarse language. The two Christians sustained several internal and external injuries – Pastor Kumar said he was beaten on all major joints, including the wrists and knees, and suffered a ruptured nerve on his wrist that turned black.

Police registered a complaint against the Christians under the Indian Penal Code for “five or more assembling and disturbing public peace,” “abetment” and “abetting commission of offence.” They appeared before the Sub-Divisional Magistrate court in Lalganj, Azamgarh District after a medical examination, and on the evening of the next day they were released on bail. Two weeks after his release, Pastor Kumar was still taking pain medication.

On the day of the arrest, Dinanath Jaiswar, a human rights activist and Christian leader in Uttar Pradesh, went to the police station with other church leaders, arriving  at about midnight. He told Morning Star News that he was utterly shaken when he saw Pastor Kumar’s condition, describing injuries to his back, wrists and knees and his difficulty walking. “He was brutally beaten in custody,” he said. “I had tears in my eyes when I met him in the police station.”

Another Christian leader who went to the police station the same night but spoke on condition of anonymity said, “It was so heart-breaking to see Pastor Pravesh. We felt so helpless. We panicked as to whom should we approach for protection, when the ‘protectors’ themselves have become assaulters.”

Pastor Kumar said that when police sent him and his uncle for medical examination they instructed the accompanying constables to state that the injuries were the result of a scuffle between them. He said the station chief warned him that if he told doctors or any senior police officer about the assault in custody, the officers “knew where to find” him.

“The officer told me that he would falsely implicate me and my uncle under the anti-conversion law and send us to jail if we tried to take any action against them,” he told Morning Star News. (The anti-conversion laws in force in ten Indian states are often used by extremists as a licence to attack Christians, claiming they are forcing Hindus to convert.)

Dinanath Jaiswar said the doctor told Pastor Kumar that he could explain the injuries truthfully. “The doctor at the hospital, shocked at Pravesh’s condition, told him that he can mention in the medical report the brutality, in which he was beaten with leather strap marks and got baton marks all over his body,” he said. “But Pravesh was very scared of the warning the police officer had given him of the consequences of revealing the truth.”

“I persisted that we must file a counter-complaint against the police,” Dinanath Jaiswar said. “I wanted to make him stand before the senior officials and question the brutality of the police department for a small complaint like this one. But Kumar was too scared to take any action.”

Pravesh Kumar was formerly a Hindu and became a Christian 18 months ago, along with his siblings and their families. The church they joined met about 40 km from their village, so the pastor encouraged Pravesh to start a fellowship at his house.

“For the past six months I have been conducting prayers in my house, and about sixty to seventy people attend the house church,” he said.

Since Pastor Kumar’s arrest, he has not led the regular church service or Friday prayer meetings. He said residents of Amamahua have threatened that they will follow the example set in Bhais Khur and call police if people gather in his house for prayer or worship. “The villagers told me that they had no idea that they could do this to me,” he said. “Now they have learned from my arrest, and they will follow the same by complaining about me to the police if I conduct church service or meet for prayers.”

Dinanath Jaiswar, who is a member of a rapid action team that helps Uttar Pradesh Christians being persecuted for their faith, described the worsening situation. “The water has gone over our heads now,” he said. “While we are extending help in one case, we are informed of two more incidents elsewhere. We are forced to shift our attention from this one to the others. By the time we are tackling the new two, there are one or two new cases. We are puzzled as to how to reach out to all of them when they are geographically miles apart from each other.”

A local Christian leader who requested anonymity told Morning Star News that government, administration, police and media have come together to target Christians. “The government has instructed the administration to carry out arrests wherever people are gathering for worship and file complaints against them under the law,” he said. “The right-wing groups get the police along, and without cross-questioning, the police arrest the pastors and lay leaders. Within two to three hours an FIR [First Information Report] is registered against them.”