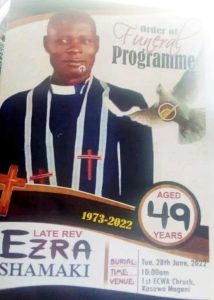 Nigeria’s Evangelical Church Winning All (ECWA) denomination has reported that six pastors have been killed and 27 members have been kidnapped since the start of the year. The ECWA report states that the attacks were carried out by suspected Fulani herdsmen and other terrorists.

The photo shows the Facebook funeral announcement for one of the six pastors – Rev Ezra Shamaki, an ECWA missionary who was killed on 21 June in the Kurmin Musa area of Kaduna state in north-central Nigeria.

James Saleh, a coordinator of ECWA’s Evangelical Missionary Society (EMS), said: “Ask God to comfort the family of the late Rev Ezra Shamaki, our missionary serving in Kurmin Musa DCC, who was shot dead by terrorists. The terrorists kidnapped his wife, and they are yet to make any contact.”

Mac Philips, another EMS coordinator, said that 15 other women and five men were also abducted in the 21 June attack. “At about 7 am, one of our missionaries was leading a prayer meeting when herdsmen stormed the village, killing and destroying anything in sight,” he said. “The armed terrorists stormed the prayer house, met them praying and opened fire on the missionary.”

He added, “The herdsmen then abducted all the women in the church, and many other men and women in the community, and left. Continue to pray for God’s protection upon our missionaries who are constantly in the line of fire, yet they have remained courageous to continue serving Him in various mission fields.”

Reporting the deaths of the other five ECWA pastors, the EMS coordinators said Rev Adamu Buba was killed on 5 July in Iburu, Kasuwan Magani, Kaduna state, leaving a wife and seven children, while Rev Nehemiah Ezekiel was killed on 5 April in an attack on the ECWA station in Unguwan Awallu in Kaduna state’s Kwassam area. Pastors Isma Dogari, Bulus Bayi and Yakubu Waziri were also killed for their faith this year.

Mac Philips told Morning Star News, “To preach the gospel for us is to die, to be safe is to stop preaching the gospel. It’s a choice we all have to make – for us, we choose the former. The gospel in Nigeria cannot be preached without casualties. Our lives are increasingly on the line, but nothing compares to the excellency of sharing the gospel to a dying world without Christ. While we mourn every day for these tragedies, we remain resolute with our weapons of love and peace, knowing that the battle before us is a mopped-up operation – because of the resurrection, we have won.”

Six other pastors were among the 27 ECWA members kidnapped since the start of the year. They included Rev Moses Dikko Usman (abducted in Kaduna state on 25 July), Rev Ahmadu Maikudi (abducted with two other Christians on 16 June in Kaduna state) and Rev Matthew Moses (abducted on 9 May in northern Nigeria’s Katsina state).

Huge increase in attacks on Christians

The Open Doors 2022 World Watch List reports that Nigeria had the highest number of kidnapped Christians in the world during its recording period (1 October 2020 to 30 September 2021) at 2,510, up from 990 the previous year. Nigeria also recorded the world’s highest number of Christians killed for their faith in the recording period at 4,650, up from 3,530 the previous year.

There was also a huge increase in the number of churches and Christian buildings attacked, damaged, closed or confiscated (470, up from 270), and in the number of Christians displaced within the country for faith-related reasons (estimated to be around 10,000, up from an estimated 1,000 in 2021’s World Watch List).