The Religious Liberty Commission of the Evangelical Fellowship of India has released its annual report, “Hate and targeted violence against Christians in India Yearly Report 2021”, in which it documents 505 incidents of persecution of Christians across India last year, a big increase on the 2020 figure of 327 documented cases.

The report explains that, contrary to these laws, India’s constitution provides equal rights and freedom without discrimination before the law (Articles 14-18 and 19-22) and states that everyone has freedom of conscience and the right to profess, practice and propagate religion (Articles 25-28). It also provides cultural and educational rights for religious minorities (Articles 29-30).

The report also points out that anti-conversion laws violate international covenants to which India is a signatory, citing Articles 1, 18 and 19 of the Universal Declaration of Human Rights, Articles 18 and19 of the International Covenant on Civil and Political Rights and Articles 2 and 3 of the UN’s Declaration on Elimination of All Forms of Intolerance and of Discrimination Based on Religion or Belief.

One of the report’s recommendations to the Government of India is that it advise state governments “to repeal the unconstitutional Freedom of Religion laws that actually limit religious freedom and are being misused by agenda driven groups to harass and create trouble for the religious minorities”.

The report highlights two of the many cases of false accusations of carrying out religious conversion that occurred during 2021. 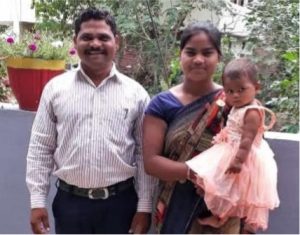 In Rangwasa village near Indore city in Madhya Pradesh state, a radical mob barged into a Christian’s home where Pastor Manu Damor was leading five families in an Easter worship service on 4 April. The pastor called the police for protection when the mob began beating down the door and tearing through the roof. Under pressure from Hindu extremists, police charged Manu and his wife Asha (both pictured) under the Madhya Pradesh Anti-Conversion Law. Asha was released on bail on 12 April and Manu on 4 May.

On 5 September, right-wing extremists in Raipur, Chhattisgarh state falsely accused Christian minister Harish Sahu of carrying out religious conversion. The pastor was called for questioning at the police station, where several right-wing activists manhandled him and accused him of religious conversion as police looked on. Two other Christians were also beaten up in the police station and the mob manhandled the Station House Officer as he tried to keep them from beating the Christians. Police filed a First Information Report against ten extremists and later arrested two of them, reportedly members of the youth wing of the ruling Bharatiya Janata Party .

Religious Liberty Commission of the Evangelical Fellowship of India

Rev Vijayesh Lal is General Secretary of the EFI and is also National Director of the EFI’s Religious Liberty Commission, which was established in 1998 to facilitate reconciliation, promote religious liberty and fundamental freedoms for all and seek justice for those who are abused and oppressed. It engages in advocacy to raise awareness on issues connected with religious liberty and other fundamental freedoms, and since 2009 it has released an annual list of incidents.

(Religious Liberty Commission of the Evangelical Fellowship of India, Church in Chains)