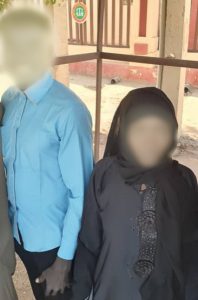 UPDATE September 2022: Hamouda and Nada were scheduled to appear in court on 15 September for a hearing on charges of adultery when they discovered that a second criminal complaint had been filed against them, this time apostasy (despite the fact that apostasy was decriminalised in 2020), and that their hearing would be postponed because of the new charges that had been added to their case. It is unlikely that the new charges will be upheld – on 30 August, a Sudanese court dismissed charges of apostasy against four other Christians – and rights advocates see the charges as an attempt to pressurise the couple into returning to Islam.

A Baptist couple from Al Bageir in Gezira state (also spelled Al Jazirah) could face a punishment of one hundred lashes after being charged with “adultery” because a Sharia court had annulled their marriage due to the husband’s conversion to Christianity.

Hamouda Tia Kafi (34) and Nada Hamad Shukralah (25) were Muslims when they married in 2016, but when Hamouda became a Christian in 2018 Nada’s family sought and won a Sharia court decision to annul the marriage on the basis of his conversion. At the time, apostasy was a crime punishable by death, though it was decriminalised in 2020 following the ousting of Sudan’s Islamist president Omar al-Bashir in 2019.

Nada and the couple’s two children went to stay with her family, but in 2021 she also converted to Christianity and returned to Hamouda with their children, whereupon her brother accused them of adultery.

Police arrested Hamouda and Nada on 17 August 2021 they were charged under Article 146 of Sudan’s 1991 criminal law, based on the Sharia court’s annulment of their marriage. (Article 146 calls for a sentence of flogging and expulsion from the area in the case of adultery by an unmarried person, and death by stoning if the person is married.)

Hamouda and Nada were detained for four days before being released on bail. Their lawyer stated, “The court has interrogated the couple after two of the witnesses told the court that the marriage between the couple is illegal, and as a result they are accused of adultery under Article 146, but I told the court that the marriage is legal.” He added that the couple faces growing threats from hardline Muslims, in particular Nada’s brother.

As well as flogging, Hamouda faces the possibility of an additional punishment of a year in exile.

At a court hearing on 12 May, a pastor who was the sole witness heard explained that, according to Christian marriage laws, Hamouda and Nada remain married despite being forced to divorce in an Islamic court.

Following the ousting of President Bashir in April 2019, advances in religious freedom made by the transitional government, including the abolition of the death penalty for apostasy, led to increasing hope for Christians, who had suffered greatly during President Bashir’s regime.